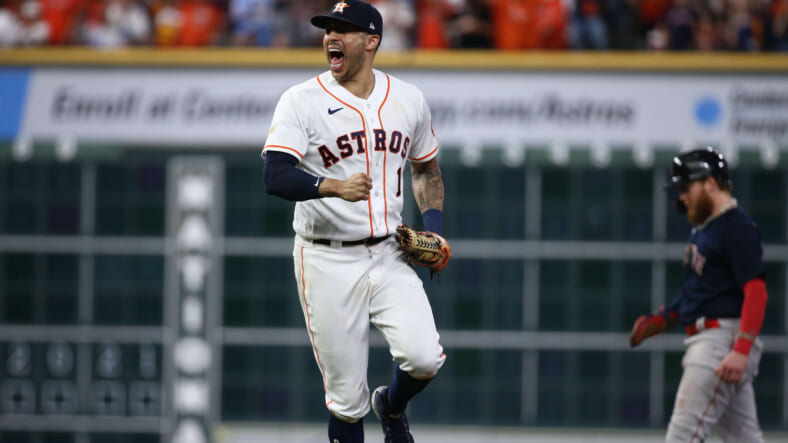 The New York Yankees are in heavy pursuit of a shortstop ahead of an expected December 1 lockout. The expectation is that both Corey Seager and Marcus Semien will sign prior to that date, putting a bit more pressure on general manager Brian Cashman. However, it is likely the Yankees will land either Seager or Houston Astro star infielder, Carlos Correa.

There are minor concerns with both, but one former GM believes the Yankees will select Seager as their new SS:

â€œAm I concerned a little bit about (Correa) hitting the high-end velocity? Of course,â€ Jim Duquette said, per NJ.com. â€œAm I worried about the back? â€¦ Yeah, the backâ€™s an issue. He was getting extra treatment on it this year as we found out. I think it was good. I think he was being proactive about it. But, over time, that does tend to be a concern for me.â€

The Yankees have dealt with their fair share of injuries in the past, so finding a reliable player would be advisable. However, every option comes with its knocks, and
Duquette still believes either would be a good selection.

â€œItâ€™s something (where) youâ€™ll sit there and go, â€˜All right. They both have had health issues in the past.â€™ But Iâ€™ll take either one. Whatever one I can sign. I think Correa on the big stage I donâ€™t have any concern. I donâ€™t have any concern about Seager. I think if you look at Correa in the postseason, heâ€™s already one of the best postseason players that weâ€™ve seen in the sport. So is Seager. Seager has a World Series MVP. So sometimes we talk about this guy, or that guy, or that guy, but I feel like weâ€™re splitting hairs with either one. Iâ€™ll take either.â€

As stated, Correa is one of the best postseason hitters in baseball. Heâ€™s coming off a post-season where he hits .283 with a 19.1% strikeout rate and .400 slugging percentage. During the regular season, he posted a .279 average with 26 homers and 92 RBIs, showcasing his elite power and fantastic patience at the plate with an 18.1% strike-out rate.

Ultimately, both Corey Seager and Carlos Correa will likely earn similar amounts, so it comes down to analytics and if the Yankees feel they can get more out of one player. The factor of Seager’s lefty bat and the short report in Yankee Stadium may be a big variable in this decision.