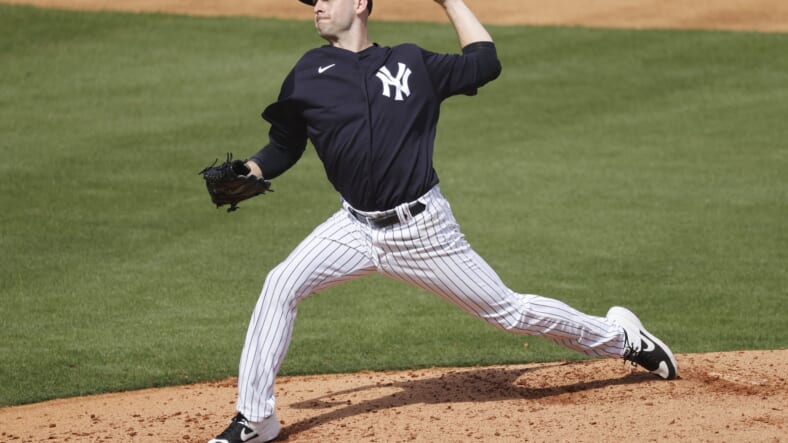 The New York Yankees took on the Toronto Blue Jays on Sunday afternoon, securing an 8-3 victory. At 13-6 this spring, the team is looking sharp ahead of opening day on April 1. Skipper Aaron Boone already confirmed that Gary Sanchez will be the opening day catcher for Gerrit Cole, and the Yankee ace looked sharp in the win.

Cole, who struggles a bit in his first two performances, earning a 4.70 ERA and allowing four earned runs, showed off his qualities against Toronto. Over 5.0 innings, he struck out eight batters and allowed one run. Cole often utilizes the spring to test different pitching fundamentals but reverts back to his usual self once the regular season begins, easily tapping into his strengths.

However, the Yankees arenâ€™t worried about Cole but rather looking to find expandable value from spring roster invites.

One outstanding player for the Bombers the spring has been Lucas Luetge, whose last MLB action came in 2015 with the Seattle Mariners.

Lucas entered Sunday with a 0.00 ERA over 6.1 innings. He had recorded 13 strikeouts and allowed just four hits. In other words, he was on fire at 34 years old and having last played in the MLB six years ago. Toronto didnâ€™t allow him any breaks, though, as they plastered him for three hits and two runs in just 1.1 innings. This anomaly shouldnâ€™t take away from his stellar spring, and the Yankees should still be considering him for an active roster spot.

With star relief pitcher Zack Britton requiring elbow surgery to remove a bone chip, the expectation is that he will be out for at least another month. Britton plays a significant part in the bullpen, logging a 1.89 ERA last season over 20 appearances. Without him, the Yankees will have to depend on adequate starting pitching and a few quality relief Â pieces. I expect Darren Oâ€™Day to be his supplement for now, but gaining Britton back in a few weeks will be a major positive. While Luetge still remains an outside shot to make the roster, if he can continue to dominate over the next week or so, he could find his name called on the final roster sheet.