Yankeesâ€™ rehabbing prospect impresses in FCL return, could he be an option for 2021? 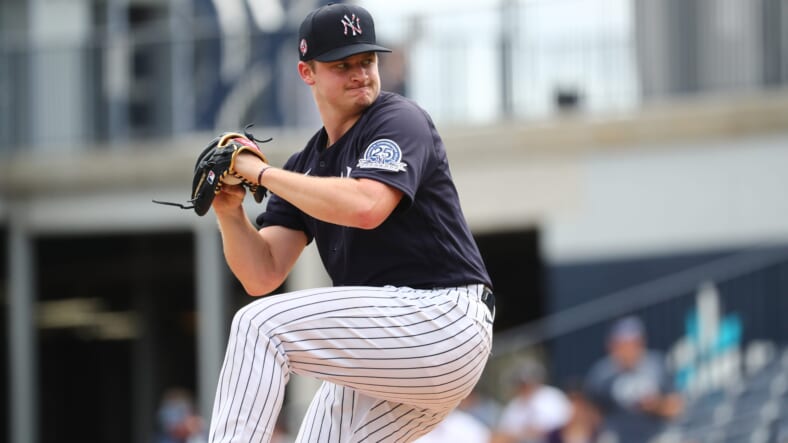 The 2021 season has certainly not gone the way Clarke Schmidt thought it would. The New York Yankeesâ€™ right-handed pitching prospect went down with an elbow injury in February. At the time, he said it was minor and he would be back soon, but that obviously wasnâ€™t the case.

To this day, Schmidt hasnâ€™t been able to pitch with the Yankees this campaign. Diagnosed with a common flexor tendon strain in his right forearm, he suffered renewed discomfort in April and his rehab got derailed. He had to rest, then start a throwing program and, a few bullpens and simulated games later, he finally pitched against competition at the Yankees Florida Complex League on Monday.

The results were excellent. He pitched for three innings in which he didnâ€™t allow runs and conceded just one hit, striking out five Rookie-level hitters.

According to Newsdayâ€™s Erik Boland, â€œone rival scout in attendance said his fastball sat 92-95. â€œChecked a lot of boxes,â€ the scout said. â€œLooked better than I thought he would.â€

Yankees announce Clarke Schmidt started a rehab assignment today with the FCL Yankees. Struck out 5 and allowed one hit in three innings. One rival scout in attendance said his fastball sat 92-95. “Checked a lot of boxes,” the scout said. “Looked better than I thought he would.”

The Yankeesâ€™ prospect in on his way

That velocity range is actually very close to his regular one. In fact, last season in his brief cameo with the Yankees (three games, 6.1 frames) Schmidt averaged 95 miles per hour, mostly in relief.

All in all, Monday was a very encouraging day for the Yankees and Schmidt. However, itâ€™s fair to wonder whether he will be ready contribute to the 2021 Bombers after all the lost time.

Because of the absence of minor league baseball in 2020, the prospect was thrown into the fire last year with only three Double-A starts under his belt although they were very good) in 2019. You could argue that he can benefit from some exposure to Triple-A hitters before the Yankees consider him for a spot in the rotation come September if there is a need.

Everything will be dictated by his workload, how much he can stretch out to, and his performance. This, however, qualifies as excellent news for the Yankees.