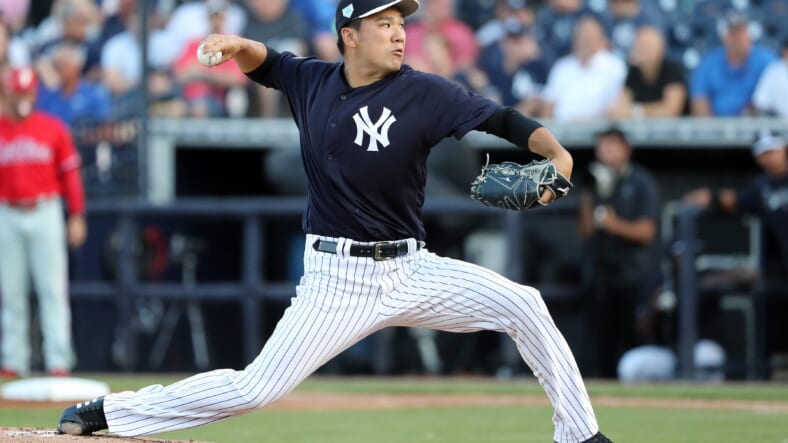 George M. Steinbrenner Field, in Tampa, Florida, was alive with excitement as the New York Yankees met the Boston Red Sox for their eleventh game of the young spring training season. The game was played under partly cloudy skies and a pleasantly warm temperature at game time of 81 degrees.

The Yankees starting pitcher was the number two in the rotation Masahiro Tanaka. It was Tanaka’s second start of the season, he got hammered in his first outing and had an ERA of 9.00. The Yankees faced Red Sox LHP Martin Perez.Tanaka was applauded from the Yankee faithful as he took the mound. He faced Andrew Benintendi, who led off for the Sox, and the “Tank” struck him out. Rafael Devers popped out to Gleyber Torres. Michael Chavis struck out, allowing Tanaka a perfect first inning. Martin Perez faced Yankee leadoff DJ LeMahieu, who is called the “Machine” due to him getting on base all the time, hit a ground ball through the center for a single. On a wild pitch to Brett Gardner, DJ advanced to second. Gardner ground out with DJ advancing to third. Gleyber Torres popped one in the infield, the throw to the plate was wide for and error, DJ, scored, and Torres went to second. Gary Sanchez swung and lost the bat into the back of the main deck that was caught by a Yankee fan in a Paul O’Neil shirt. Gary made it first, and Torres scored for the 2-0 Yankee lead.

Still in the first Luke Voit got an outfield single moving Sanchez to second. Miguel Andujar, who was playing for the fourth time in the outfield, stepped to the plate and popped to the outfield in a ball that couldn’t be caught by the centerfield to load the bases. Mike Tauchman had a sac fly driving in Sanchez for the second out. Gio Urshela walked re-loading the bases, and that was it for starting pitcher Perez who threw 34 pitches in 2/3rd of an inning. Hunter Haworth took over for Perez as the Yankees brought their ninth batter to the plate. Clint Frazier with the bases loaded, another wild pitch allowed Voit to score, Yankees 4-0. Frazier walked, and DJ LeMahieu doubled driving in two more runs. Yankees 6-0. Brett Gardner struck out to end the inning the Yankees picked up six runs in a very poorly played inning by the Red Sox.

Tanaka took to the mound in the top of the second and ground out Lucroy. Peraza struck out for Tanaka’s third knock out. Sturgeon struck out. Tanaka struck out four in two innings using only 21 pitches. Haworth came out for the second, and Torres flew out. Sanchez struck out. Voit lined out for the last out. Tanaka, in the third, got Chatham to ground out. Duran was Tanaka’s fifth strikeout. Andreoli reached on an infield single, Gio got the ball, but Voit fell catching it. Benintendi grounded out to end the inning. Josh Taylor pitched the third for the Sox. Andujar ground to the second baseman. Tauchman struck out. Urshela hit his first home run to center, and it was 7-0 Yankees. Frazier had his second walk of the day. DJ LeMahieu ground out for the final out.

At the fourth, Tanaka’s day was over with Clarke Schmidt pitching. Devers immediately homered over the back fence, making it Yankees 7 Sox 1. Chavis got a hard-hit single. Lucroy ground out. Peraza struck out. Sturgeon made the final out. Taylor, back out for the fourth, got Gardner to strike out. Torres made a scorched line-drive double that hit the left-field wall. Sanchez, in his 4th at-bat ground out to second. Torres moved to third. Voit towers one for the final out of the fourth. Yankees 7 Sox 1.

Schmidt in the fifth faced Chatham and walked him. Duran struck out. Andreoli singled, but Chatham was out at second. Schmidt struck out Benintendi for the third out. At the bottom, Austin Brice faced Andujar who struck out, Tauchman flew out to center, and Urshela also stuck out. At the sixth Adam Ottavino faced Devers who flew out to Andujar. Chavis struck out swinging. Jett Brandy made the third out. The Red Sox used Josh Osich in the sixth. Frazier walked, Mike Ford ground out with Frazier going to second. Higashioka got an infield single the dropped directly behind the pitcher, who had no idea where the ball was. With two on Tyler Wade in his first at-bat of the game walked to load the bases with one out. Estevan Florial struck out. Kyle Holder struck out, leaving the bases loaded.

Zack Britton came out for the seventh. Dalbec flew out to Florial. Sturgeon flew out to Milone in left. Hernandez flew out to Floria for the quick Britton inning. Domingo Tapia allowed an Estrada single. Gittens walked. Milone singled to load the bases with no outs. Amburgey was out at first, but Estrada scored as Lucroy failed to tag Estrada. Ford ground into a double play. Yankees 8 Red Sox 1. Loaisiga took the eighth, pitching to Longhi, who struck out. De La Guerra struck out, and Jantzen Witte also stuck out with a filthy one, two, three innings for Loaisiga. At the bottom, Higashioka singled, Wade singled, and Higgy went to second. Florial ground out to first, but the runners advanced. Holder singled, but Higgy was caught trying to make it home. Estrada singled, and Wade Scored for the 9-1 Yankee lead. With Gittens at the plate, there was a throw out at second that went in the outfield, and the runners advanced for the Red Sox second error. Gittens worked a walk to re-load the bases. Milone flew out for the final out.

With last licks for the Red Sox in the top of the ninth Loaisga who had stuck out 8 of the twelve batters he has faced this spring training took the mound to close it out of the Yankees. Downs ground out, Matheny ground out to third, and Bandy struck out for the 15th Yankee strikeout of the game and the 9-1 Yankee win.

Tanaka was impressive firing on all cylinders; he had 40 pitches in 3 innings with 28 strike balls thrown and five strikeouts while not allowing a ball out of the infield. Although Clarke Schmidt allowed a homer, he struck out four in his two innings. In overall fantastic pitching, Jonathan Loaisiga, in the 8th, struck out the side. The Yankees won 9-1 against the Red Sox in a game filled with Red Sox errors and wild pitches. The winning pitcher was Tanaka and losing pitcher was Perez.Â