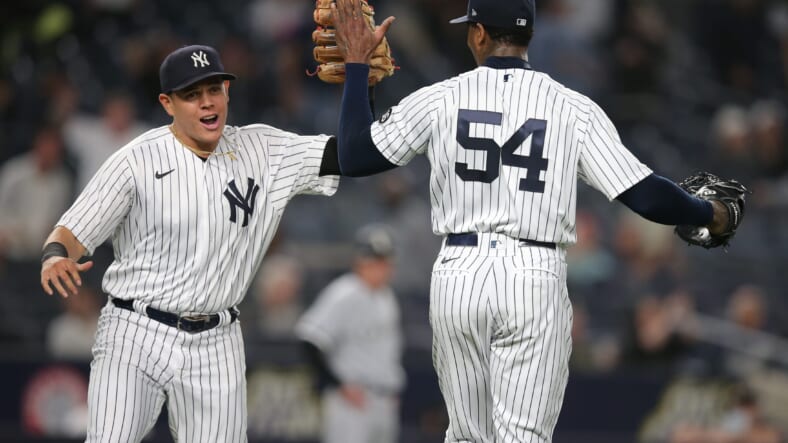 However, it was the timely hitting of Gary Sanchez and DJ LeMahieu that pushed the Yankees over the edge. However, closer Aroldis Chapman did his best to blow another save, giving up two hits and a run in the ninth inning before skipper Aaron Boone turned to Wandy Peralta to finish off the contest. Peralta, with the bases loaded, drew a fly ball to left-field, which was caught by Joey Gallo.

Another tight squeeze for the Bombers, who extracted yet another victory. Unfortunately, both the Red Sox and Tampa Bay Rays won on Tuesday as well. Currently, in the AL East standings, the Yankees are 4.0 games behind Tampa and now have a 2.5 game cushion in the Wild Card over Boston.

The Yankees finished off the two-game series against the Braves with a sweep and now look forward to the Oakland Athletics in a four-game series on the West Coast. After Oakland, the Yankees will travel to Los Angeles to take on the Angels before returning home against Baltimore.

Seemingly, this race for the AL East could come down to the final series of the season, which comes against Tampa Bay. This could end up being a playoff-like atmosphere at Yankee Stadium.

Nonetheless, the team is expecting starting third baseman Gio Urshela to return after successfully getting through several rehabilitation games with Double-A Somerset.

Urshela will return to the team on Wednesday, as the Yankees have off before they take on Oakland starting Thursday. In his absence, the Yankees have depended on a rotation of players at third base, including Rougned Odor and Tyler Wade. Returning Gio will offer the team one of the most consistent hitters and arguably one of the best defensive third basemen in baseball.