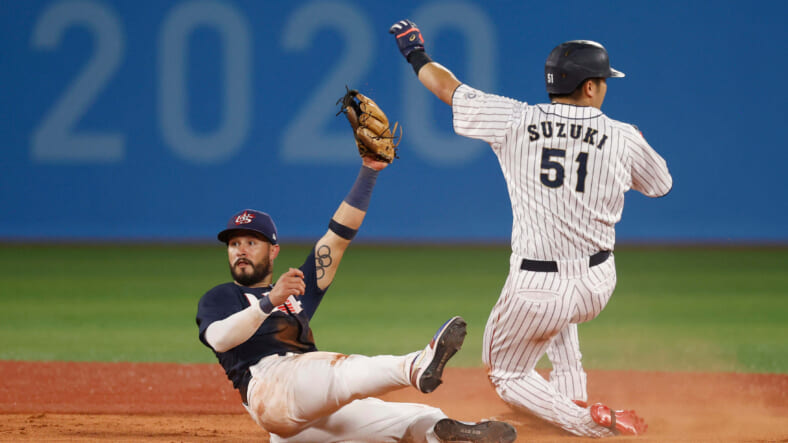 For the New York Yankees to have a productive off-season, they need to find and acquire players to fill the shortstop, outfield and starting pitching slots. After the failed experiment at shortstop with Gleyber Torres, the Yankees were thought to be interested in acquiring a big-money, long-term solution. But reports continuously indicate that management may prefer a stopgap instead of a big name like Carlos Correa.

In this predicted free agency haul, the Yankees walk away with upgrades at multiple spots, including a high-upside starting pitcher to pair with Gerrit Cole at the front of the rotation. While some of them may be risky, they are more cost-efficient over a long-term perspective.

Three free agents the Yankees could sign in free agency 2.0:

The Yankees were linked to Trevor Story at the trade deadline this past year, but management reportedly “soured” on him as they drew closer to the deadline.

However, Story could be a solid fit for the Yankees over a short period of time as they wait for several young prospects to develop in a farm system. Oswald Peraza and Anthony Volpe are making great progress, and Story could offer the team two years of quality play at shortstop before moving him to another spot. In addition, they could overpay on a year-by-year salary instead of giving him a long-term contract that would pay him more over 6+ seasons.

Defensively, Story is more than sufficient to hold down one of the most important infield spots. Last year, he posted a .975 fielding percentage with 14 errors over 1,175 innings. He turned 91 double plays and logged 9 defensive runs saved above average. Having been in the MVP race on multiple occasions, the Yankees would be adding a solid player with proven abilities, and considering the short porches in Yankee stadium, his home-run total might even see a minor increase.

The Yankees allowed Clint Frazier, Tyler Wade, and Brett Gardner to walk this off-season, so they will need an outfield supplement. One name that has bubbled to the surface is Seiya Suzuki, a star from Japan who might translate well as a power hitter in Yankee Stadium.

Suzuki’s statistics closely mirror Hideki Matsui’s back in the day, and at 27-years-old, Suzuki could be ready to make the jump to the MLB with a team like the Yankees.

This past season with the Hiroshima Carp in the Japanese Central League, Suzuki hit .317 with 38 homers and 88 RBIs. While pitching at the MLB level will be far more competitive, if he can get the hang of it, he could be one of the more underrated signings of the off-season. The Yankees can offer him a five-year, $55 million deal, which is what he’s expected to land in free agency.

One way or another, Cashman is going to have to find another starting pitcher to inject into the rotation. After presenting Justin Verlander with a one-year, $25 million contract, which he turned down to return to Houston, it is proof that management is willing to spend on the right player.

With most of the top pitching targets off the board prior to the lockout, one player who remains is Carlos Rodon.

Rodon posted a 2.37 ERA this past year, representing his lone successful season. The Yankees might be able to get away with offering Rodon a three-year deal with an out after the second season by increasing his pay per season to sweeten the offer.

The Chicago White Sox starter saw an increase in velocity this past campaign, elevating his fastball from 92.9 mph in 2020 and 95.4 mph in 2021. His clear-cut elevation in velocity is something the Yankees will likely consider in their evaluation, but he would offer a high-upside starter that can provide the Yankees with a one-two punch behind Gerrit Cole.