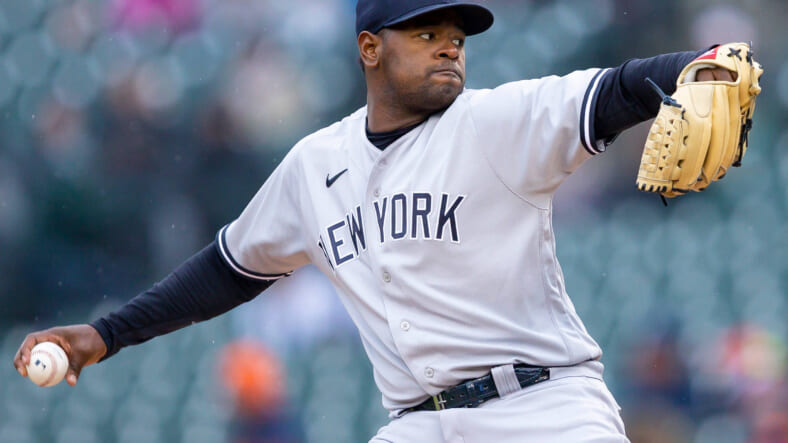 The New York Yankees completed what should be, hopefully, the first of many moves over the next few months. The team picked up Severino’s option, meaning he’ll be making $15 million this season to pitch in Pinstripes. It was a given, and if anything, one of the easiest decisions that this FO has had to make in recent memory.

Severino was one of the best performers this season when he was healthy and had the team not elected to take the long, safe recovery route, could’ve returned to action sooner. $15 million for a player of Severino’s caliber is a steal, and now this upcoming season could see Severino getting a big payday.

The Yankees pitching staff this season, helmed by Matt Blake, saw improvements across the board and great performances all year long.

Take away Montas, who wasn’t even healthy when he was pitching, and I feel as though every guy did their job — and, for some, went above and beyond. Severino was one of the stories of the season, in my opinion, because he was able to go out there and shut down all the naysayers. Coming into the 2022 season, there were questions about how the Yankees were going to use Sevy. Having missed almost the entire season prior and only appearing briefly in a relief role, nobody was too sure about what he had to give the organization.

Luis Severino dominated, thanks in part to a new pitch in his arsenal:

Severino would go out there and put together a remarkably efficient and effective season for the Yanks. He tossed 102.0 innings this season, the most he’s thrown in a single season since 2018. If one were to take a gander at Sevy’s BaseballSavant page, one could see just how good he was. His xSLG, xBA, and xERA/xwOBA were all in the top 20% of the league.

Severino was able to do what he does best, and that is dominate hitters with his electric fastball. Seeing it sit at 96.3 MPH, a whole tick above last season’s average velocity, and dance around the plate was a thing of beauty. He threw it 48% of the time, roughly the same as he had in years’ past, but he also incorporated a cutter this year. Sevy had thrown a total of two cutters the previous three seasons, and this year he amped it up to a 7% usage rate and saw a 40.6% whiff rate come with it.

Sevy’s bounce-back season means amazing things for the Yankees. Coming into this year, many had questions about the rotation’s future outside of Gerrit Cole, and now the Yanks know they have at least three fantastic pitchers to fill out the five-man rotation. Cole, Cortes, and Severino make what should be one of the best front threes in the AL. Severino posted a 3.18 ERA this season to go with a 3.70 FIP — all whilst limiting the longball (only a 13.9% HR/FB%) and not issuing as many free passes (2.65 BB/9). His revamped approach to attacking hitters, and the continued usage of his slider and changeup as put away pitches, really allowed both his four-seam and cutter to take center stage.

2023 will be a huge season for Sevy, and assuming he picks up right where he left off, he should be a key contributor for this team’s push for a World Series. His passion, energy, charisma, and emotion that he pitches with make it so he will always give 110% for the name on the front of his jersey. He pitches with his emotions on his sleeve, never wants to back down from a challenge and pitch around guys, and knows that the stuff he has can easily beat anyone at the dish. He missed over two seasons’ worth of starting opportunities, but it looked like he didn’t miss a beat. Sevy has done everything the organization asked of him, even going on the 60-day IL for an injury where he felt that wasn’t necessary.

If Severino can toss 160.0 innings, an extension has to be agreed upon:

Assuming he can reach those numbers this upcoming season, Sevy could find himself on the receiving end of a very tidy extension. He showed that he is still elite in this game and that the time off injured didn’t slow or hinder his abilities. Luis Severino should be a Yankee for life, and it’ll be interesting to monitor how the team chooses to approach his future with the club. There are few guys out there who’s passion and energy match the way they pitch and the stuff they throw, but with Severino, it’s a match made in Heaven.

Sevy is undoubtedly one of the unspoken leaders of this team, and I feel like he, Cole, and Cortes can give the team as good of a shot as any front three put together. The 2022 season has come and gone, with all sights turned to 2023. Severino is coming off a fantastic “look what I can do” campaign, making sure to let all those that were unsure about him know he’s back. He threw 102.0 innings and could’ve pitched a bit more had the team not wanted to be so cautious around him (which I get).

If, or should I say when, Severino crosses a certain threshold, the training wheels have to be abandoned. I understand this year playing it safe, first year back, postseason run, and all the other reasons. Next year, however, there should be no bumpers on the sides. Sevy should be allowed to toss every game with no bearings, and if he reaches 160 or so innings, an extension seems almost guaranteed.

2023 will see this Yankees team look drastically different than the one we just watched go out with a whimper in the ALCS. I imagine the rotation will feature a new face or two (or perhaps Montas is ready to try), but Severino will firmly stake his claim as the middleman in the roto. Any team in baseball would love to have Sevy as their #3, but the Yankees have that luxury. Look for Severino to be the talk of the clubhouse when pitchers and catchers report, as a full season will have him in the AL CY Young conversation.