Yankees: One lowkey relief pitcher could play a big role during the playoffs 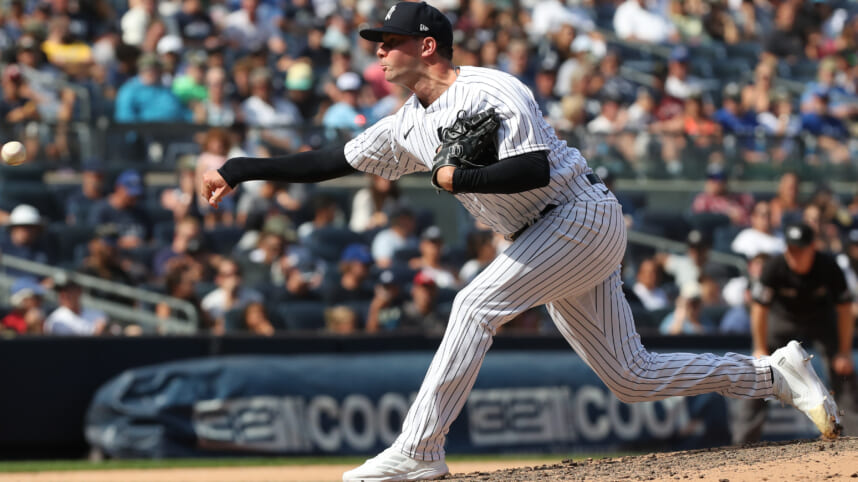 The New York Yankees haven’t officially announced their playoff roster just yet, but trade acquisition Scott Effross plans to be a significant part of the bullpen.

A day after lefty struggling pitcher Aroldis Chapman abandoned his team in a contract year, earning $16 million, the Yankees will look elsewhere to find support late in games. This was part of the reason general manager Brian Cashman elected to trade for a frost at the deadline, to begin with; a pitcher who had just one year of MLB experience, totaling 14.2 innings before the 2022 season.

The Yankees will likely lean on Scott Effross during the playoffs:

However, Effross has put his best foot forward in 2022, earning a combined 2.54 ERA and 9.85 strikeouts per 9 over 56.2 innings. His numbers with the Yankees have been even better, enjoying a 2.13 ERA, a 79.4% left-on-base rate, and a 41.2% ground ball rate over 12.2 innings. In fact, if you take away one tough performance against the St. Louis Cardinals on August 7, Effross hasn’t given up an earned run over 12 performances.

The 28-year-old bullpen arm is only arbitration-eligible in 2025 and will hit free agency in 2028, giving the Yankees a consistent threat for the next few years at the very least. Utilizing an interesting arm slot at about 45°, Effross puts fantastic spin on the baseball — he throws a slider, sinker, change-up, and 4-seam fastball sequence.

To the liking of pitching coach Matt Blake, he primarily leans on his slider/sinker combination. His slider generates a .149 batting average with a 30.1% whiff rate and a 25.2% put-away rate over 40.2% usage. His sinker has produced a .333 batting average this season with a 36.4% put-away rate.

Seemingly, the Yankees have utilized his sinker and change-up as primary strikeouts pitches. Effross has generally average pitches in terms of vertical and horizontal movement, but his arm angle allows them to sweep across the plate or dip back in toward the batter, which can create depth confusion.

While he hasn’t enjoyed any postseason experience up to this point, he projects to be an integral piece of the puzzle for the Yankees, especially with Clay Holmes and Wandy Peralta coming off injury. Effross enjoyed a few performances down the stretch, giving up just two hits over 4.1 innings after spending a few weeks on the injured list from August 20 to September 24.

Nonetheless, Cashman didn’t acquire the young relief pitcher to take a backseat during the postseason but rather integrate him fully into a more prominent role.