Yankees: One lowkey international prospect climbing the minor league system you need to know about 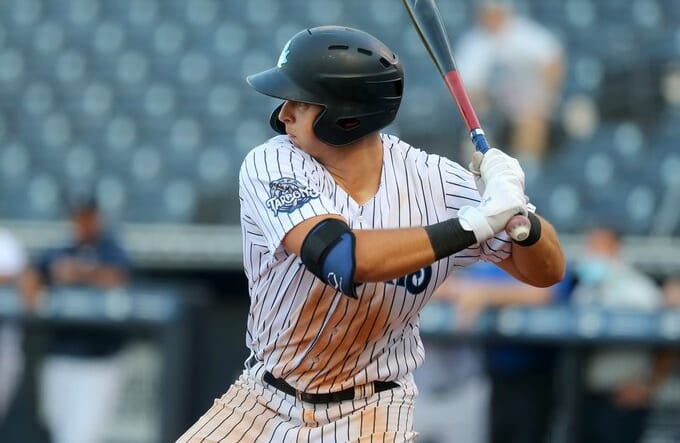 Andres who? We all know that the New York Yankees have a pretty deep farms system. Because of that, many prospects fly under the radar while the media concentrates on most of the top candidates, like Anthony Volpe, Oswald Peraza, Luis Gil, and others. But a deeper look into the farm system can uncover some surprising prospects that you may never have heard of. Andres Chapparo is one of those young men.

Surprisingly, he has stayed out of the bright lights of the New York Media. He has been in the system since 2015 when he was an international signing out of Venezuela. The 22-year-old, 6’ 1” 200-pound third baseman has been developing during his time in the Yankees’ minor leagues, but he had a breakout year at both Florida low Tampa and the A+ South Atlanta League last season. He hit .267 with 15 home runs in just 101 games.

Chapparo started the season at Low-A Tampa and was a considerably better hitter after the 2020 idle minor league season. His slash line was .270/.378/.435 with 24 extra-base hits and a 123 wRC+. He was promoted to high-A with those stats, where he played even better. In finally hitting his stride, he ended the season at both levels with improved power and a .264/.387/.527 slash and a 144 wRC+ slash line.

In his Florida League recap, PSA’S Dan Kelly had this to say about Chapparo:

Few players have made loud contact like Chaparro this fall. The 22-year-old Venezuelan went 3 for 3 with three doubles in Surprise’s 7-6 loss to Peoria. He now has eight doubles tied for second-most in the league. Chaparro has been prone to swinging and missing, but when he makes contact, he does damage—11 of his 18 hits in the AFL have gone for extra bases.

The New York Yankees will be watching Chaparro closely this season as he is expected to advance even further in the minor. He could end up with the Hudson Valley Renegades at some point in the season. He is still young and with a lot of potential if he keeps advancing as he has in the past few years. 2021 saw exit velocities north of 115 mph.