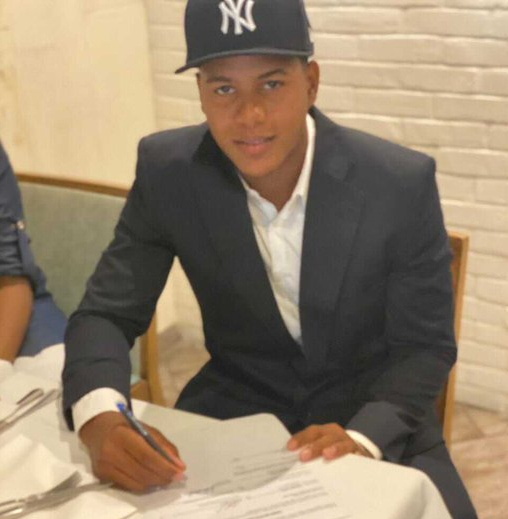 The New York Yankees yesterday inked Fidel Montero, an outfielder out of the Dominican Republic. It is their second signing of a Montero in international free agency. On the first day of the signing period, they signed shortstop Hans Montero, who signed for $1.7M. Hans was their top target in international free agency. Furthering their efforts to produce great teams in the future, yesterday’s signing of the second Montero shows their commitment to the future.

The Yankees entered this signing period with the 2nd lowest amount of bonus-pool money, due largely in part to a 1 million dollar hit after they signed Gerrit Cole, who declined the qualifying offer from the Houston Astros late in 2019.Â  The Yankees have managed to sign five players. In addition to the two Monteros (not related), they signed two other players from the Dominican Republic and one from Venezuela.

Hans Montero stands between 5â€™10â€ and 6â€™0â€ tall; the shortstop Montero recently turned 17 years old this past Christmas Day. A right-handed hitter (and obviously thrower), he projects to stay at short through the majority of his career. Most talent evaluators will indicate his smooth action and play-style. He posses average plus speed and has the ability to hit the ball of all fields.

Fidel Montero is an outfielder with great promise. Fidel stands 6′ 1″ and weighs about 175 pounds. He was originally listed as a shortstop but has played in the outfield during the last few seasons, where he has been making a name for himself. He had a breakout season in 2019 as a 15-year-old. He has been listed as one of the most complete talents internationally. Ben Badler of Baseball America says that although he has great raw tools, he shows inconsistency, something the Yankees will have to fix.

Continuing to be confrontational leading up to this year’s renegotiation of the CBA (collective bargaining agreement), the players union seems to resist anything the owners want to do. Now they don’t even want to discuss moves to make it safer for players and staff. As the U.S. grieves another 3,500 deaths from COVID-19 on Saturday, the Players Association is bringing forth criticism of any plan of action for keeping on-field talent safe and healthy.

The Biden Administration scheduled a call with MLB, the owners, and the MLBPA (players union) on ways to make it safer for all involved, including a delay so that all players and staff could be vaccinated before the season starts. The MLBPA wouldn’t even take part in the phone call. The union is standing firm for no special rules and a return to 2019 play. With the union’s reluctance to even talk about health, they could be playing with fire.