Yankees News/Rumors: Gary Sanchez responds to angry fans calling for him to be traded 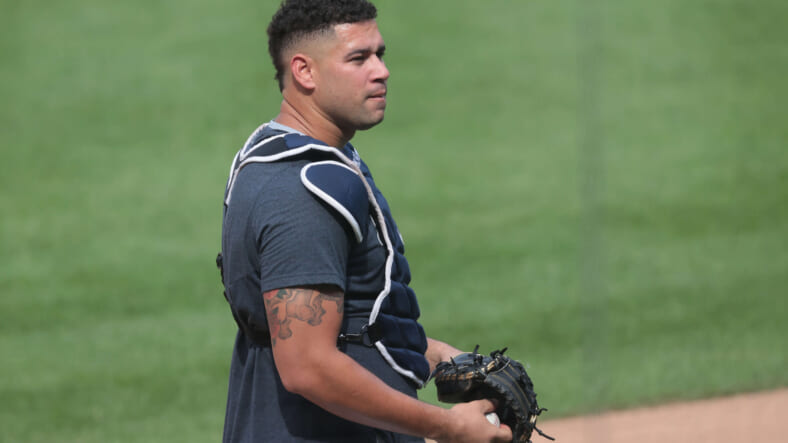 New York Yankeesâ€™ catcher Gary Sanchez struggled significantly in 2020, finishing with a .147 batting average with 10 homers and 24 RBIs. He logged a career-high 36% strikeout rate and a career-low .253 on-base percentage. He also earned the first negative WAR of his career.

His performance comes on the back of a poor 2019 campaign as well, but his slugging numbers are often his saving grace. His ability to hit home runs and fit into the Yankeesâ€™ lineup makes him a key piece, but his defense has taken a step backward, and fans have noticed his regression.

After the 2020 campaign concluded, management indicated they would be reevaluating the catcher position, as the Yankees were connected to future Hall of Fame catcher Yadier Molina and even saw their names come up in the James McCann and JT Realmuto market.

Nonetheless, the Bombers understand they canâ€™t spend a ton of money this off-season and have offered Gary a one year contract. Heâ€™s arbitration-eligible in 2022, and the Yankees lose control of him in 2023, so they donâ€™t have much more time to see what heâ€™s made of and if he can be a long-term solution. Based on his recent numbers, the road ends after 2021, so Sanchez is in dire need of a bounce-back year.

ESPN’s Marly Rivera interviewed Gary Sanchez, in which he stated his frustration over a lack of communication from the team and fans wanting him traded:

I simply do not understand. I am always working hard. Yankees fans are great, but at the same time, they are very demanding. If you’re hitting well, fans love you, they do whatever it takes for you. But when you are not doing well, then it starts … and you know. They will yell anything at you. Sometimes it can be difficult not to have a little encouragement. But those are Yankees fans, and the only thing that matters are results. And I would not have it any other way. I love the high expectations. I can be booed one day when I have a bad game, and the next day I am the hero of the game. But I think sometimes people do not understand that baseball is a game where you are going to fail many more times than you are going to succeed. I just don’t understand that criticism. The results were not there; that is true. But it was never due to lack of work.

Sanchez has always worked hard to improve his abilities and refine his skill set to fit what the Yankees want. From changing his catching style to his batting techniques, he has worked tirelessly to improve his game. The issue, he simply hasnâ€™t taken the step forward most have hoped and expected. That has put him and the team in a tumultuous position, as heâ€™s running out of time with every passing year.