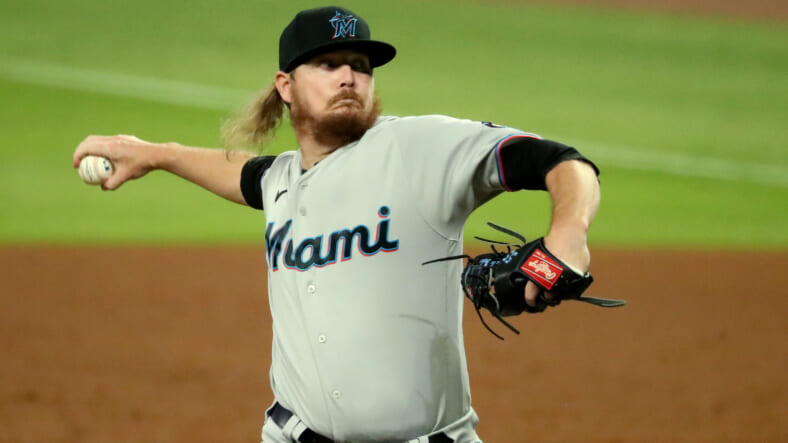 The New York Yankees are looking to add some fireballers to their bullpen to shore it out. They have the backend completely set, Zack Britton, Chad Green, and Aroldis Chapman are more than enough firepower. The issue is the middle innings, and they simply don’t have a solid 4th guy. Adding names to the mix with talent helps to add depth and talent to the bullpen, and that’s exactly what Ryne Stanek provides. Is he Liam Hendriks? No, not even close, but is he a talented pitcher? He sure is, and Bryan Hoch is reporting that the Yankees are very interested in the hard-throwing righty.

Ryne Stanek Has a Rocket Arm

According to Statcast, Ryne Stanek’s fastball can run it up to 100 MPH, with it sitting at 95-97 on average. For 3 consecutive years, he’s been well above average in fastball spin rate as well. This is paired with a nasty slider that generates high whiff% numbers, contributing to his strikeout stuff. His rocket arm is probably why the Yankees are interested in him, as if they can manifest that arm, they might have a nice asset on their hands. You can teach someone how to pitch, but you cannot teach a 100 MPH fastball.

Ryne Stanek’s talent is amazing, but he does have a major problem with walks. The Yankees are hoping they can curb this if they get him, but since 2018 he boasts a. 11.6% BB%, not good atÂ all. While the Yankees can certainly help the problem with Matt Blake’s analytical genius, he’s still always going to walk more batters than most. His control is why he’s even so available on the market, and it’s something that matt Blake and Ryne Stanek would have to overcome in order for him to succeed.

We could either see the Ryne Stanek who had a 3.52 ERA and 28.8% strikeout percentage or the Ryne Stanek who stunk (no pun intended) in 2020. His walks and his ability to command the zone will be crucial in development. While the Yankees are probably just keeping tabs on pitchers, Ryne Stanek could be a very nice pickup for a very cheap price for the ballclub. I don’t imagine him getting much money, but IÂ do see him potentially having a massive impact with the right pitching coach.