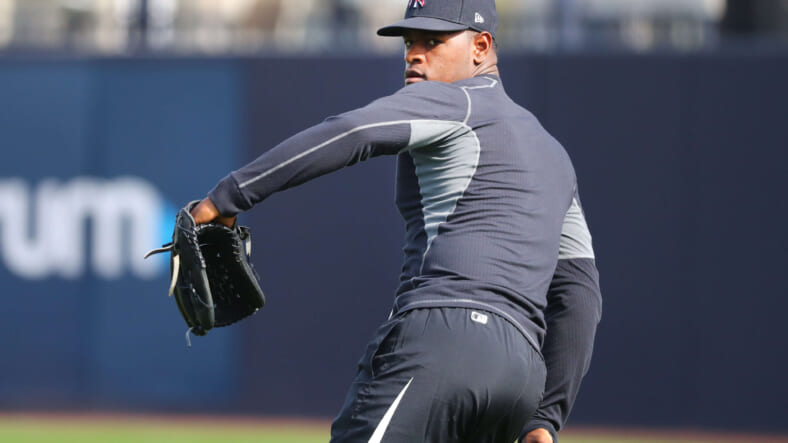 The New York Yankees are going into the 2021 season with the expectation that starter Luis Severino will not be a part of the rotation. His timeline for return has him joining the team in late summer, which means the Yankees will have to supplement his loss in the meantime.

Luckily, the Yankees did a solid job adding starting pitching this off-season, even if they took a few big risks in the process. General manager Brian Cashman admitted that he was forced to take a few calculated risks based on financial flexibility and ownership’s desire to stay under the $210 million luxury tax threshold.

However, the latest updates on Severino are inspiring, as heâ€™s taking significant steps forward toward a return, which might lead him to a more efficient recovery timeline and previously anticipated.

Yankees bullpen coach Mike Harkey is convinced that Severino will return to 100% health and make an impact this upcoming season.

â€œIâ€™ve seen a lot of first-time bullpens after Tommy John (surgery),â€ Harkey said, â€œand watching Sevyâ€™s was probably the most comfortable Iâ€™ve ever seen a player.â€

Harkey detailed why Severino looks as good as he does, complementing his work ethic and undying desire to make a full comeback.

â€œItâ€™s all because of hard work,â€ Harkey said. â€œHeâ€™s worked his tail off to get to this point. Through a series of serious injuries and rehabbing for months and a year, it takes a toll on your mind, and definitely takes a toll on your body. But it also gives you the chance â€” if you dig into it â€” you can do things now to your body that you werenâ€™t able to do when you were healthy because you have that extra time.â€

The last time Severino pitched was in 2019, pitching just 12 innings after recovering from another significant injury. That next spring training led to Tommy John surgery, so heâ€™s only pitched 12 innings over the past two years, indicating he might suffer through some speed bumps along the way in 2021.

However, we know Severino can be a quality pitcher, hosting a 3.39 ERA in 2018 over 191.1 innings. His 10.35 strikeouts per nine and 19 wins tell the story, and adding him back to a rotation that seems to be flush with talent should get fans excited.