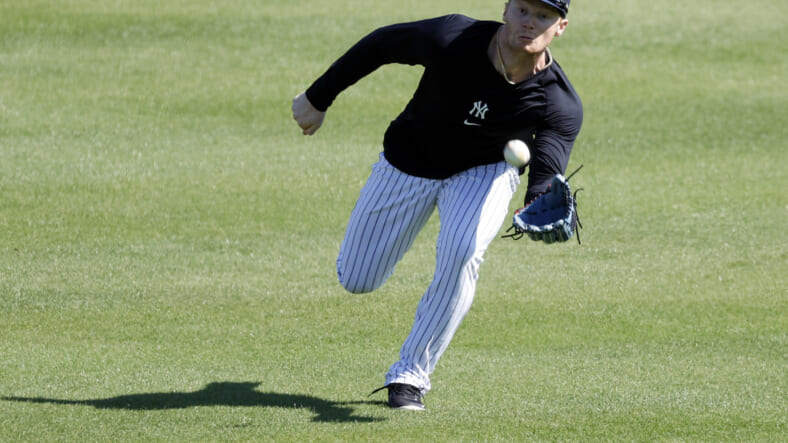 The New York Yankees have one final week to iron out their active roster before the start of the 2021 regular season. With Clint Frazier penciled in as a primary starter in the outfield, skipper Aaron Boone feels confident that they have their long-term solution at LF. Frazier showed out in 2020, posting a .269 average with eight homers and 26 RBIs over 39 games. His defense took a dramatic leap forward, finishing as a Gold Glove finalist.

However, Frazier had an injury scare several days ago, running into the outfield wall and staying down for a few minutes. Luckily, all indications point toward him being 100% fine, despite Boone deeming him â€œsluggishâ€ over the weekend.

The Yankees had Frazier play in right field on Sunday against Toronto, and he didnâ€™t miss a step, going 2-for-4 and hitting a two-run double. The Yankees are testing him out at different spots, similar to the role Brett Gardner played during his time as a starter. Frazier can fill in diversity, and it only increases his value to the team. The Yankee outfield has picked up plenty of injuries of the past few seasons, so having quality supplemental options is a major bonus. For example, if Aaron Judge were to miss any games, Frazier could move to right field with ease and Brett Gardner would take over in left.

â€œHeâ€™s playing right field, so I kind of wanted him to stay back and get some work in right field, just to have a couple days rolling into that,â€ Boone said before Sunday’s wn over Toronto.Â â€œSo heâ€™s good to go.â€

This spring, Frazier is hitting .321 with two homers and six RBIs over 31 plate appearances. Heâ€™s had a phenomenal offensive spring and has been consistent defensively as well. While he has struck out eight times, heâ€™s made some solid contact and earned three walks, showing off a bit more patience. The 26-year-old has an opportunity to lock down the starting position for the foreseeable future, and heâ€™s well on his way to accomplishing that goal.