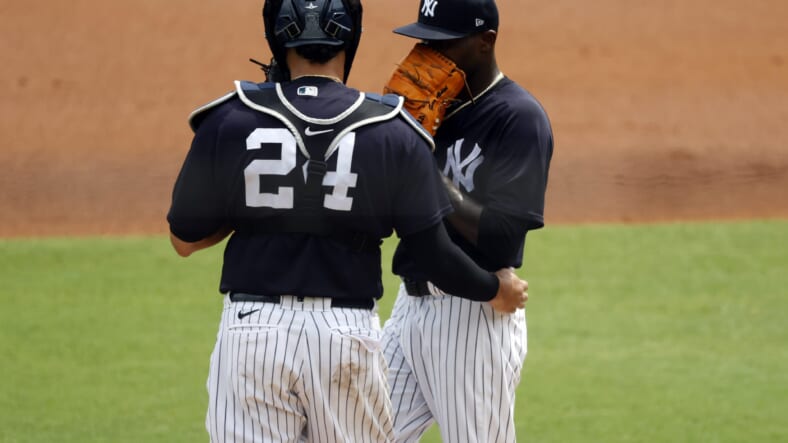 The New York Yankees offered catcher Gary Sanchez one more opportunity to prove that he can be their long-term solution at the position. In fact, they gave him a slight raise, signing him to a one-year, $6.35 million extension this past off-season. General manager Brian Cashman believes that he can be the future, but Sanchez has taken consecutive steps backward the past few seasons. In 2020, Sanchez hit .147 with 10 homers and 24 RBIs. He logged a career-high 36% strikeout rate and negative WAR for the first time.

However, Sanchez believes his spring training has gone well, especially on the defensive side of the ball where his fundamentals are being shifted.

â€œI definitely felt more comfortable in the new position having my right knee down. I felt better moving, reacting, flexibility. Thereâ€™s a combination of things that Iâ€™m very happy with. Itâ€™s been a lot of work.â€

Offensively, Sanchez started out strong but fell back down to earth, currently sitting with a .200 average, three homers, and four RBIs. Heâ€™s doing a bit better in terms of making contact but has struck out in nearly 45% of his at-bats, a terrible number.

â€œOffensively, I started very well getting the results I wanted right out of the gate,â€ Sanchez said. â€œThere were some ups and downs the rest of the camp, but thatâ€™s OK. Itâ€™s something that Iâ€™m going to work on. What weâ€™re looking for is consistency and we have an opportunity once the regular season starts to have that contact consistency.â€

What should the Yankees expect from him in 2021?

We know Sanchez is capable of performing at a high-level, considering he hit .278 with 33 homers in 2017. Nonetheless, that was over three years ago, and the Yankees havenâ€™t seen that production from him since. The closest he came was in 2019 when he recorded a .232 average with 34 HRs, which would be welcomed by Cashman moving forward.

â€œOn the offensive side, you saw more results early in camp, less results late in camp,â€ GMÂ Brian CashmanÂ said. â€œOn the defensive side, heâ€™s definitely worked his tail off and weâ€™re getting a lot of positive reviews from our catching coach. His receiving has been improved, but then youâ€™re going to collapse all that into itâ€™s March and February and what do you make of it?â€

Cashman makes a great point, what do you make of two months of work when you need an entire season of production and efficiency? Sanchez has shown that he canâ€™t be relied on, which is why the Yankees utilized Kyle Higashiosaka last postseason predominately, going as far as making him Gerrit Coleâ€™s primary catcher.

At the end of the day, this is Sanchezâ€™s last opportunity to lock in a long-term extension, and if this spring is any indication of whatâ€™s to come, Iâ€™m not feeling too confident in his abilities.