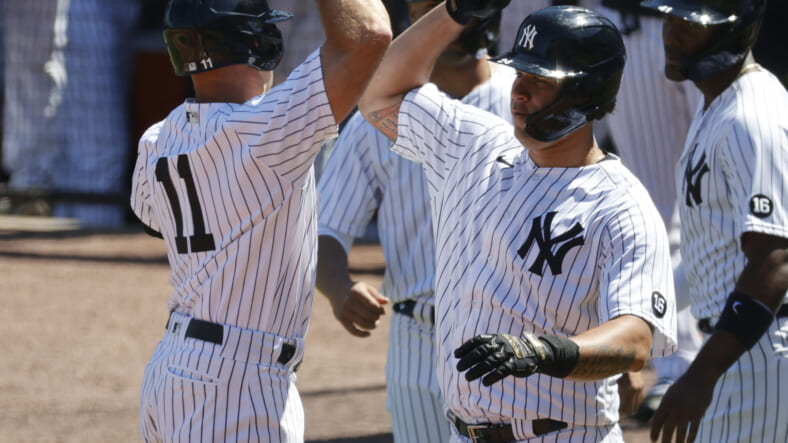 With the 2021 season winding to an end, the New York Yankees are desperately fighting to gain ground in the Wild Card standings. Currently, they are 0.5 games back from the second spot held by the Toronto Blue Jays. The Boston Red Sox have taken a 1.5 game lead, and with a series coming up against the New York Mets, who have lost five of their last six games, the Yankees could be in a bit of trouble.

Luckily, the Bombers managed to escape on Monday with a victory over the Texas Rangers, who only have 55 wins on the season. With Nestor Cortes Jr. taking the mound, the starter lasted 4.1 innings, allowing five hits and three earned runs. He struck out seven batters over 92 pitches. The bullpen looked solid, giving up just two hits the rest of the way as they often struggle to get going.

The Yankees scored all of their runs in the second and third innings, thanks to a Gary Sanchez homer and a bit of contact hitting in the third. Despite Sanchez launching a long ball, the Yankees have found themselves in a conundrum with the veteran catcher, who has been spotty defensively the past few games. Nonetheless, skipper Aaron Boone still has plenty of faith in Gary, who is currently hitting .211 with 22 homers and 52 RBIs on the season.

â€œThese final two weeks, everythingâ€™s up for grabs,â€ Aaron Boone said before the game. â€œIâ€™m going to run out there what I think gives us the best chance to win. And I think in Higgy and Garyâ€™s case, I think they both bring a lot of value. Weâ€™re going to need both of them to play big roles here down the stretch.â€

The Yankees have 11 games remaining, and with their last nine against AL East opponents, their toughest challenges are ahead. Finishing off a three-game series against the Texas Rangers, the Bombers will then head to Boston and Toronto over six days, and then they will finish out the season with Tampa Bay at home.

The two series against Boston and Toronto will end up being the decision-maker for the Wild Card, so the Yanks must be on top of their game. A series sweep against either of those teams would likely give them enough cushion to last the rest of the campaign and walk away with a postseason spot. However, after giving up 22 runs into games against Cleveland over the weekend, thereâ€™s a reason to believe the Yankeesâ€™ inconsistencies are not going away.

Luckily, the rotation falls in a way that Gerrit Cole will feature against Boston in the first game on Friday evening, so they can put their best foot forward and start strong as they prepare for the toughest stretch of games this season.