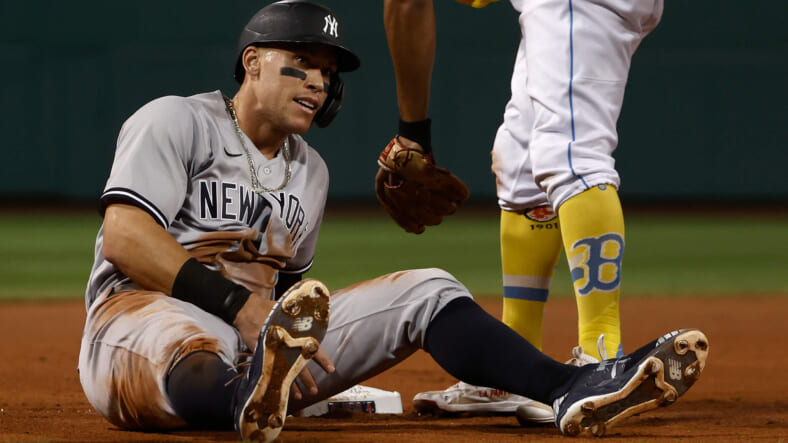 The New York Yankees triumphantly overcame the Boston Red Sox this weekend, sweeping them in a three-game series. Currently, the Yankees have a one-game lead at the top of the Wild Card, with Boston falling into second place and Toronto just one game behind for the last spot.

The Yankees are red hot, winning their last six games as they prepare to take on the Blue Jays in a three-game series that would likely determine the rest of the season. With just six games left in the 2021 regular season, the most important week for the Yankees is about to commence. If they can win the series against Toronto, they will then take on a tough Tampa Bay team starting on October 1, who have won five of their last six games.

In the victory over Boston on Sunday evening, the Yankees once again relied on slugger Giancarlo Stanton to save the day. Stanton recorded two hits and two RBIs, launching a two-run homer, driving in Aaron Judge. His long ball went flying over the Green Monster yet again, giving his team a 6-3 lead.

Despite the victory, slugger Aaron Judge suffered a minor injury, but with the adrenaline pumping, he managed to correct it on his own.

“Just going for two there, trying to get into one position for Big G behind me and the biggest mistake was not going feet-first. I’m kicking myself with that,” Judge said. “Popped up, really didn’t feel much, and then when I went to kind of check my batting gloves [and] I saw it was kind of out of place. Tried popping it back in, it kind of got stuck again, so just needed some help. Not too concerned with it. I really don’t know what’s going on, but I don’t really need it to hit so we’re going to be in good shape.”

Judge seems to be in good shape and wonâ€™t have to miss any time, as a dislocated pinkie was put back into place and he continued playing the rest of the game.

As for lefty hitter Joey Gallo, he was plunked in the shin, which will likely leave a nice bruise. Having a day off before the Yankees take on Toronto will provide much-needed rest, so hopefully, Gallo will be ready to finish off the year without any complications.

“He got smoked pretty good on the shin. I think he was able to walk it off pretty well,” said manager Aaron Boone. “We’ll see. We’ll see how he is overnight.”