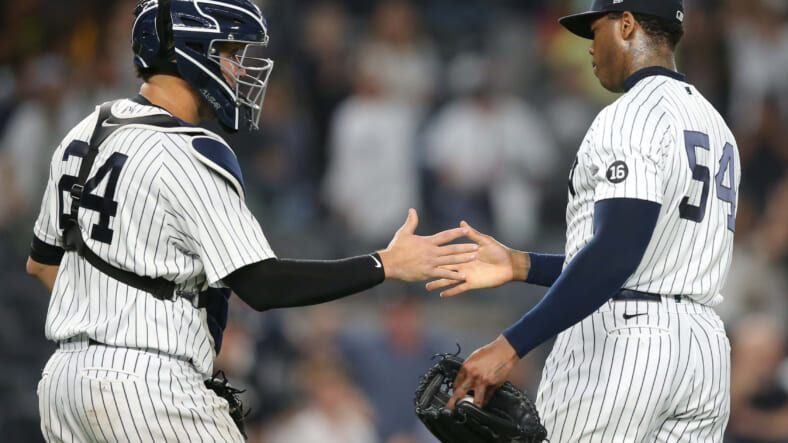 The New York Yankees are in control of their own destiny as they fight for a Wild Card spot with the Toronto Blue Jays and Boston Red Sox. Currently, the Tampa Bay Rays have the AL East locked up with a six-game lead over Boston, but the Yankees have taken a slim lead in the Wild Card with just a 0.5 game advantage over Toronto. Boston has two games over New York, so that last spot in the WC is up for grabs.

Luckily for the Bombers, Toronto fell to the Rays on Wednesday night by a score of 7-1, which represents the only time the Yankees actually want one of their biggest rivals to win a game. Toronto is headed to Minnesota to take on the Twins in a four-game series before taking on New York up north.

The Yankees understand they have complete control of their future, as skipper Aaron Boone mentioned after Wednesdayâ€™s victory over the Texas Rangers.

“We’re in control of things,” manager Aaron Boone said. “And there’s some comfort in that. It’s on us, it’s right in front of us.”

“There’s some comfort in knowing we don’t have to get help from anyone else,” Boone said.

With Corey Kluber on the mound, the Yankees rallied to overcome Texas 7-3. Kluber, who is slowly getting back into shape, pitched 4.1 innings giving up eight hits and three earned runs. He currently holds a 3.82 ERA, but the bullpen also played exceptionally well, striking out four batters and not giving up a hit over the final 4.2 innings.

Offensively, the Yankees recorded nine hits, with four coming from Gio Urshela and Kyle Higashioka. However, when Gary Sanchez entered the game late over Higashioka, he launched a two-run homer in the eighth inning to give the Bombers a healthy lead. The offense was silent until the fifth inning when Higgy launched a double to deep centerfield, driving in Gio end Gleyber Torres.

You get the sense that the Yankees are forcing themselves to play at a high level, still struggling at times but posting 14 runs over the last two games. The upcoming series against Boston could be the biggest one of the year, and with the Red Sox winning seven straight games, the Yankees undoubtedly have their work cut out for them.