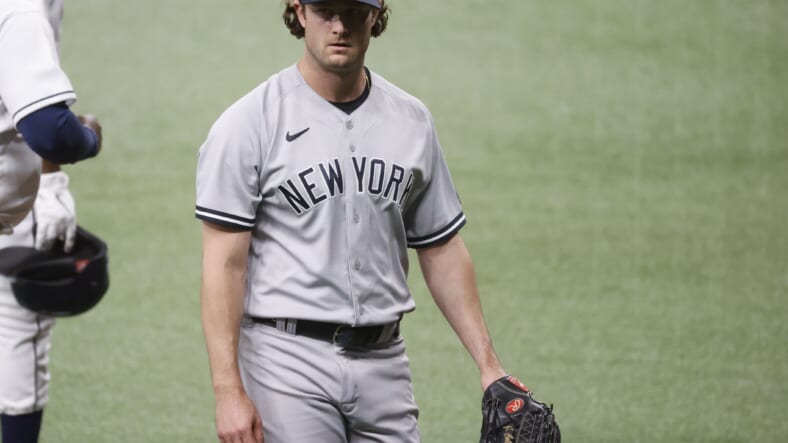 May 12, 2021; St. Petersburg, Florida, USA; New York Yankees starting pitcher Gerrit Cole (45) looks on as he walks back to the dugout at the end of the sixth inning against the Tampa Bay Rays at Tropicana Field. Mandatory Credit: Kim Klement-USA TODAY Sports

The New York Yankees walked away with one win in a three-game series against the Mets this weekend. While Game 1 was rained out and postponed for a later date, the Yankees have only won two of their last nine games, indicating one of the worst cold streaks in baseball. While they did emerge victorious in the second game of the doubleheader on Sunday, the pitching has been lackluster as of late. Against one of the worst offenses in baseball, the Yankees allowed 20 runs in two days (3 games).

One of the most disappointing performances came from starter Gerrit Cole, who only lasted 3.1 innings before being taken out by Aaron Boone. He gave up four earned runs, six hits, and walked three batters before handing the ball to Jonathan Loaisiga.

Cole has allowed as many earned runs in his last two starts as Jacob deGrom has allowed all season, which should give you a pretty clear idea of how poorly the ace has been performing.

Over his last seven games, Gerrit hosts a 4.69 ERA with 21 earned runs allowed and 12 walks. Ever since the MLB cracked down on using substances to improve spin rate and velocity, cole has seen his pitches slow and breaking ball flatten.

â€œIâ€™ve got to take the positives from a personal standpoint, but obviously losing the lead and being responsible for that is first and foremost on my mind,â€ Cole said. Asked about being booed by these fans for the first time, Cole said, â€œIt is what it is. You sign up for it when you come here.â€

Ultimately, if the Yankees donâ€™t have a star pitcher to help them win games regularly, they are going to struggle moving forward. In addition to Cole, closer Aroldis Chapman has been a liability the past few weeks since the crackdown.

Over Chapmanâ€™s last seven appearances, he hosts a 16.88 ERA with 10 earned runs and nine walks allowed. Clearly, both pitchers have been impacted significantly by the rule changes, and unless they can find a way to adapt in the coming days, the Yankees will be watching the postseason from their million-dollar couches.