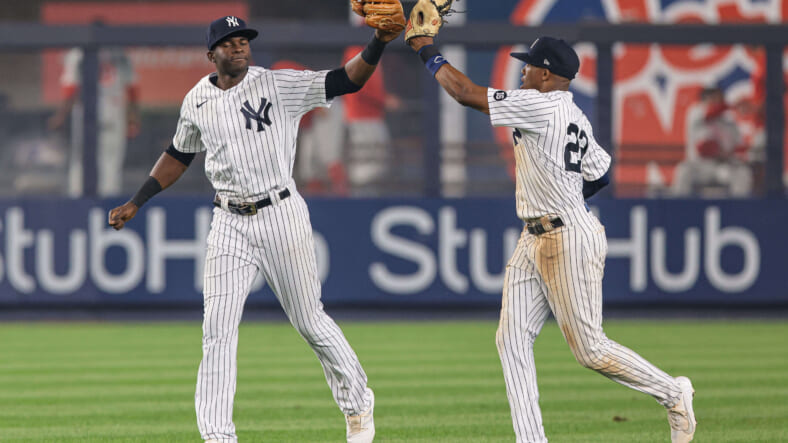 The Yankees are currently enjoying a three-game winning streak, defeating the Philadelphia Phillies 6-4 on Tuesday evening. Thanks to a solid outing by the bullpen and consistent hitting throughout the lineup, the Yankees are slowly inching their way toward playoff contention.

While they do remain seven games back in the AL East standings, they have climbed to within four of the Wild Card, making it possible for them to commence on a late run.

One player the team elevated recently has been playing lights out in the outfield and in the batting order, hitting .500 with a .875 slacking percentage over eight at-bats. While the sample size is extremely small, seeing a player record four hits, including a double and triple over four games in his first appearance this season is remarkable.

Greg Allen is the player who has lifted the spirits of the Yankees and provided some much-needed speed and contact toward the bottom of the order. The Yankees have been relying primarily on reserve players recently, who seem to have sparked efficiency, which is extraordinary.

Nonetheless, general manager Brian Cashman could still be eying a potential trade at the deadline, and one writer believes it could be lucrative.

The Athleticâ€™s Ken Rosenthal proposed two ideas for the Yankees to completely upgrade their defense and add diversity to the batting order:

TheÂ Yankees, in dire need of left-handed hitting and athleticism, are an obvious fit for Gallo; one rival exec says the Yanks can dramatically improve their defense by adding Gallo and shortstopÂ Trevor Story, then movingÂ Gleyber TorresÂ to second base andÂ DJ LeMahieuÂ to first. At least one other club, though, is practically panting for Gallo â€” theÂ Padres, who are run by the sportâ€™s most fearless deal-maker, A.J. Preller.

Of course, the concept of adding Joey Gallo and Trevor Story is tremendous, but the Yankees might have to give up a large number of assets to acquire both while retaining DJ LeMahieu and Gleyber Torres at the same time. Young starting pitcher Deivi Garcia would likely have to be part of the deal, as Gallo has one year left on his contract before becoming a free agent. At 27 years old, heâ€™s hitting .230 this season with 24 homers and 52 RBIs, fitting the Yankees’ mold of offensive production and slugging power.

In addition, Story is hitting .243 with 11 homers and 43 RBIs, enduring his worst season since 2017. However, he is a fantastic defensive player at shortstop, and at 28 years old, has plenty of gas left in the tank. Heâ€™s currently on a two-year, $27.5 million deal that expires after the season. It is possible the Yankees could acquire both for minimal assets based on their contract situation, and both would heavily contribute toward a more efficient team moving forward.