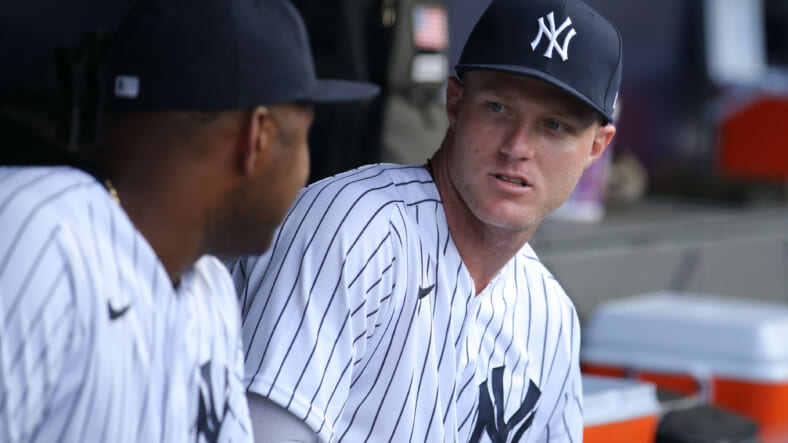 The Yankees seem to be rolling once again, despite featuring a lineup with mostly reserve pieces. After COVID-19 ravaged the starting team, the Yankees called upon Chris Gittens, Trey Amburgey, Ryan LaMarre, and Greg Allan to fill the void. Luckily, they did more than enough to smash the Red Sox 9-1 in a second consecutive victory after the All-Star break.

In total, the Yankees recorded eight hits, thanks to the bottom three in the lineup, who totaled five. A fantastic pitching performance by Jameson Taillon, lasting 5.1 innings and giving up just four hits, lead the team to victory.

However, the injury bug remains prevalent, as Amburgey picked up a hamstring injury putting on the afterburners trying to beat out a double play.

Depth outfielder Ryan LaMarre also picked up a nick on a catch in the outfield but ended up staying in the game and toughing it out. Some other Yankees might be able to learn a thing or two.

The Yankees are once again dealing with another fan-related issue:

During the second half of Sundayâ€™s game, a fan reportedly shined a red light into the batter’s box, which was noticed by both catchers, Gary Sanchez and Christian Vasquez.

â€œIt was a light, like a spotlight, coming from above the monuments [in center field],â€ Boston manager Alex Cora said. â€œThey have the windows. There was a red light flashing in between pitches. Then it was white. But no big deal, to be honest with you. But (Vazquez) noticed it right away in the LeMahieu at-bat.â€

Sanchez also affirmed the sighting, dissolving any narrative that it was an attempt to cheat and steal pitches.

â€œThey said a red light was what they saw somewhere in the batterâ€™s eye,â€ Boone said. â€œGary (Sanchez) said something about it and that it happened to him when he was catching as well. I didnâ€™t even know where it came from but they said there was a red light that flashed up there.â€

Yankee Stadium has been home for a few bad incidences the past few days, but the team has dealt consequences when appropriate. Nonetheless, the Yankees are slowly crawling their way back into the AL East standings, with an important series starting on Tuesday against the Phillies.