Yankees News: 3 positives to look at after Opening Day 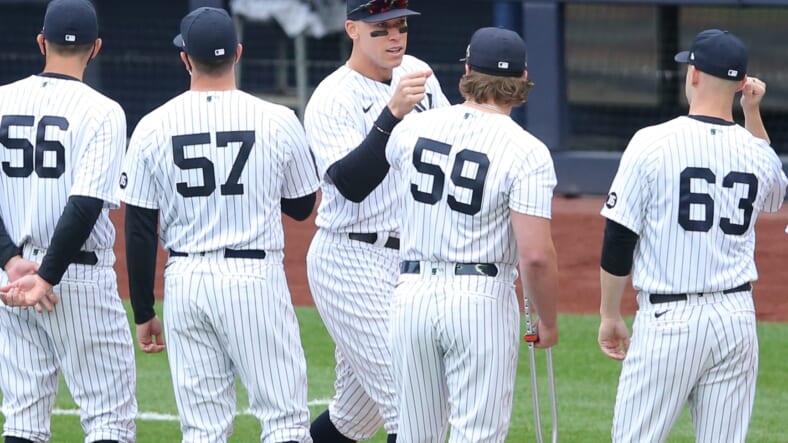 The New York Yankees fell to the Toronto Blue Jays in extra innings on Opening Day, putting forth a disappointing performance in the offensive category. Losing 3-2, the Yankees pitching did enough to get them over the hump, but their premier batters struggled to get things going. In fact, Aaron Judge, Aaron Hicks, Giancarlo Stanton, Gleyber Torres, and Gio Urshela combine for 12 strikeouts out of a total of 13.

There were a few positives in the loss, as the Yankees prepare to take on Toronto on Saturday afternoon, but for the most part, it was not how they wanted to start the regular season. The Yankees struggled to finish spring training, and clearly, some of their issues carried over into the regular season. While more live-action and at-bats will help them get out of their funk, having Corey Kluber on the mound on Saturday should be a bonus.

Three positives to take away for Yankees:

In his first action of the 2021 season, Gary Sanchez got the job done, launching his first at-bat into the stands. Hitting a home run to left field 407 feet was exactly how Sanchez wanted to start his season, and he also picked up two hits and a walk, +2 RBIs.

While his defense looked improved, his chemistry with Gerrit Cole seemed a little off at times, as Cole gave up a home run in the 6th, which lost the lead for the Yankees after Sanchez acquired it in the second inning.

Despite Cole finishing with a 3.38 ERA and giving up five eights and two runs, he did strike out eight batters over 5.1 innings. I would argue that Garrett looked phenomenal in this outing but just missed on a few poorly located pitches. Those issues will quickly be alleviated considering his quality, but it was great to see him rack up the strikeouts in his first appearance of the season.

While Frazier did make one mistake in the outfield, his offense was stellar, picking up two hits and one walk over three at-bats. After finishing the 2020 season as the starting left-fielder, earning a .267 average with eight homers and 26 RBIs, he started off his regular campaign strong. Hopefully, he can continue dominating offensively and provide the spark the Yankees need at the bottom of the order.