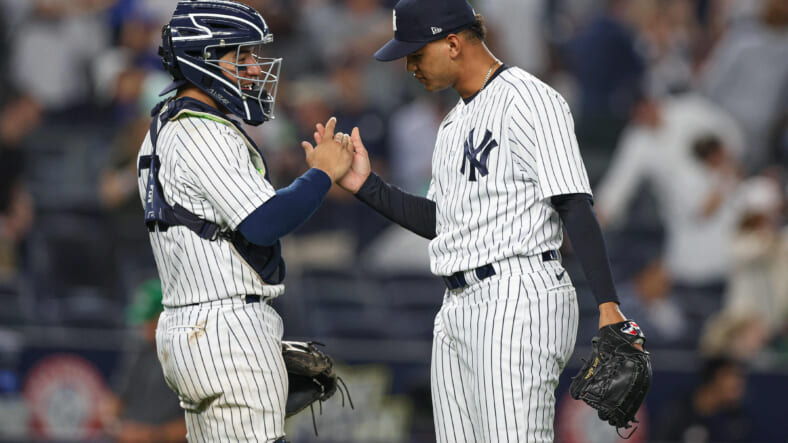 When the New York Yankees realized they needed to add another catcher to the equation prior to the start of the 2022 season, they targeted Jose Treviño from the Texas Rangers. Luckily, Texas wasn’t looking for a massive haul, so the Yankees packaged together Albert Abreu and Robby Ahlstrom in exchange for the 29-year-old catcher.

Fast forward to late June and the Yankees now have Treviño and have brought Abreu back, essentially parting ways with Ahlstrom as the lone piece in the deal. Treviño has been phenomenal, posting a .270 average with a 32% on-base rate, six homers, and 23 RBIs. In fact, he’s blown everybody out of the water with his efficiency, both on offense and defense.

It was a testament to general manager Brian Cashman’s genius this past off-season watching Treviño catch Abreu on Monday night in an electric comeback win over the Oakland Athletics.

Abreu had been DFAd by both Texas and the Kansas City Royals before making his way back to the Bronx. He’s been lethal, throwing heat in the strike zone.

“When the news came that I was gonna come back and join the team again … it felt like hope, like I was getting hope again,” Abreu said through Yankees interpreter Marlon Abreu. “I had lost my confidence and just walking into the Stadium, walking through the doors, I felt a rush of energy and positive energy. And it just let me know that this is where I belong. I felt like a different person right there just walking in this clubhouse.”

The Yankees are getting the most out of Albert Abreu:

Management has been extremely happy with Abreu’s performance thus far. Over 3.1 innings for the Yankees, he features a 10.80 strikeouts per nine rate, 100% left on base rate, and is generating a 33.3% ground ball rate.

Abreu has primarily been utilizing his fastball and slider, essentially taking away his change-up. He’s been using his change up at 11.1% this year, which has dropped to 3.8% with the Yankees.

Pitching coach Matt Blake focuses heavily on sinker ball throwers, which is one of Albert’s primary pitches. Opposing batters are hitting just .190 with a .238 slugging percentage off Abreu sinker this year. Against his slider, they’re hitting .167 with a .222 slugging percentage, indicating great efficiency with both pitches.

Changing Abreu’s sequence strategy should help elevate his game tremendously. Especially as a relief arm that touches 98 mph on average with his fastball. There’s a lot of value left to untap. The Yankees have arguably the best pitching coach in baseball to help build on his skill set.