Yankees may have to make a difficult decision with Matt Carpenter 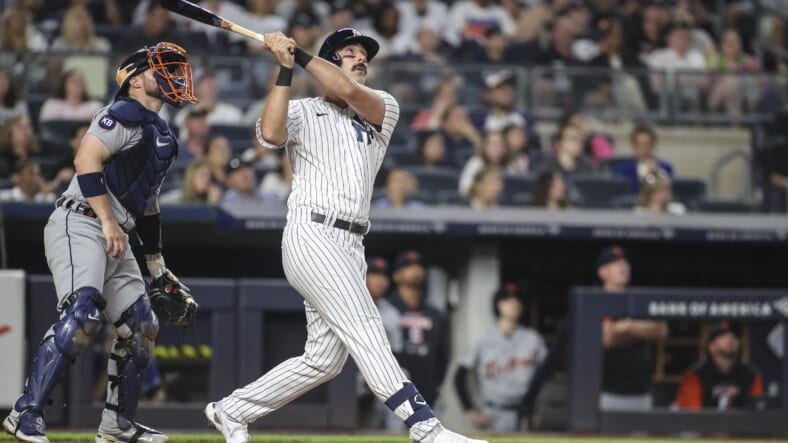 Matt Carpenter was quite a find for the New York Yankees in the summer. He was rejected by several teams and ended up signing a cheap Major League deal to play in the Bronx. The organization helped him and gave him all the tools to succeed, and he did just that: with a .305/.412/.727 line and 15 home runs in 154 plate appearances, not to mention his 217 wRC+, he quickly became a fan favorite.

But he fractured his left foot on August 8, and had to miss the whole regular season while rehabbing. The offensively-challenged Yankees took the risk of carrying him on their ALDS roster against the Cleveland Guardians without at-bats in a competitive environment to regain his rhythm: he didn’t have time to do that, because the recovery took him weeks.

The results have been disastrous, but expected: he struck out in both of his at-bats against the Guardians, and has also fanned in his five trips to the plate against the Houston Astros in the ALCS. The Yankees took a risk, but it hasn’t worked out: seven plate appearances, seven Ks.

If they make it to the World Series, the Yankees shouldn’t give a roster spot to a player who is clearly far from getting his timing back. It’s not his fault: injuries are part of the game, and he has had a great demeanor an attitude, but baseball is a game of reps and practice: the only way for him to regain his groove is with MLB at-bats, and the team can’t afford to have him striking out all the time in a Championship Series.

His lack of rhythm was evidenced in Thursday’s at-bat against Ryan Pressly in the ninth inning:

Believe it or not, pitch one was a take; and pitch four was a swing (technically, a check swing in which he was fooled by the pitcher) that ended the game with the tying runner on base. Yes, it’s one of the best closers in the business, but the at-bat wasn’t even competitive.

The Yankees can’t afford to give Carpenter many more at-bats at this point. It’s too bad, because he worked hard for this. But it shouldn’t happen.