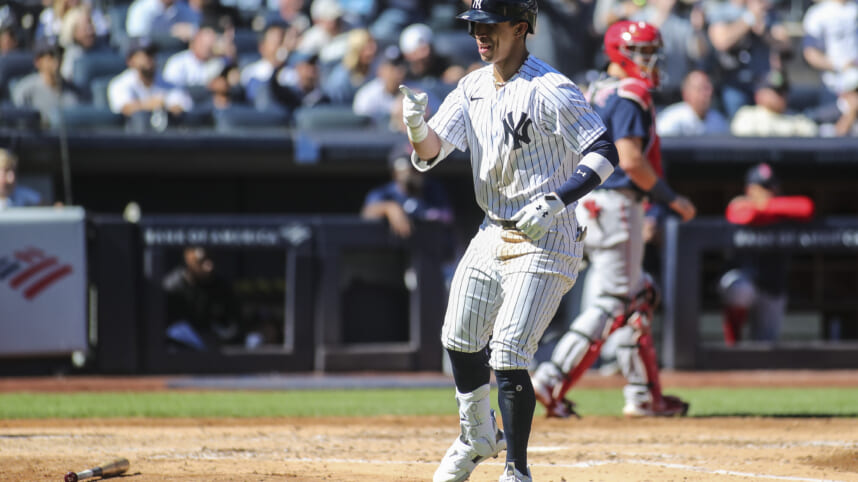 The time may be nearing its end for the Yankees, but manager Aaron Boone isn’t waving the white flag quite yet. Following an unconvincing offensive showing the first two games, the boys are hoping that the Bronx faithful will help provide a spark. The Yankees have shown that they may not know who to trust in the biggest moments, but tonight’s lineup is one of the better ones we’ve seen.

Over the course of the ALDS and ALCS thus far, there have been a multitude of different constructions of the squad, featuring a few leadoff hitters. Tonight, Anthony Rizzo has been bumped up to the leadoff spot and Gleyber and Bader bat 5th and 6th, respectively. The whole lineup is as follows:

So far, we have seen the likes of IKF, Oswaldo Cabrera, and on Thursday, Oswald Peraza play shortstop for the Yanks. Many have been critical over IKF’s defensive abilities, and whilst Peraza flashed the glove on some gorgeous plays, he seemed a step behind offensively. That’s not a slight on Peraza, after all he only played 14 games prior, and the team failed him more than the other way around. Tonight’s lineup needs to put runs on the board early and capitalize with RISP. It seems that this series has exploited a ton of the fundamental flaws with the way this roster is constructed, but a win tonight could shift the tides in the Yanks’ favor.

The Yankees’ inability to have realized that IKF isn’t a starting-caliber shortstop has since come back to bite them, and the constant changes to the shortstop in the starting lineup shows that. Fortunately, they realized before it’s too late. Tonight, the Yankees play with 45,000+ cheering for their team, and hopefully, they can use that as fuel to fight back. Boone also decided it was best to move Josh Donaldson, who, aside from his leadoff double on Thursday has looked lost, down in the lineup.

Carpenter has struggled at the plate since returning from injury, specifically on breaking balls that drop out of the zone. He’s hitless thus far, but that could all change tonight with one swing of the bat. If Marp is able to get going, that could be one of the major keys to the Yanks’ ability to come back in this series. Currently down 0-2, it’s far from over, but the urgency has to be there. Hopefully, Oswaldo Cabrera can make a few plays defensively and put the ball into play, as the bottom third of the lineup needs to show more than they did Thursday.

The Yankees have struck out 30 times this series, compared to Houston’s measly 8. Whilst Houston truly haven’t looked that much better — Bregman was their entire offense Thursday, and Yordan & Altuve are struggling — they still have taken two gritty games. Pitching has done their job, and tonight that looks to continue with the undisputed ace, Gerrit Cole on the bump. Baseball in the Boogie Down, Yanks’ postseason hopes hanging on.