Yankees lose closer Aroldis Chapman to injury, climbing the standings in the East 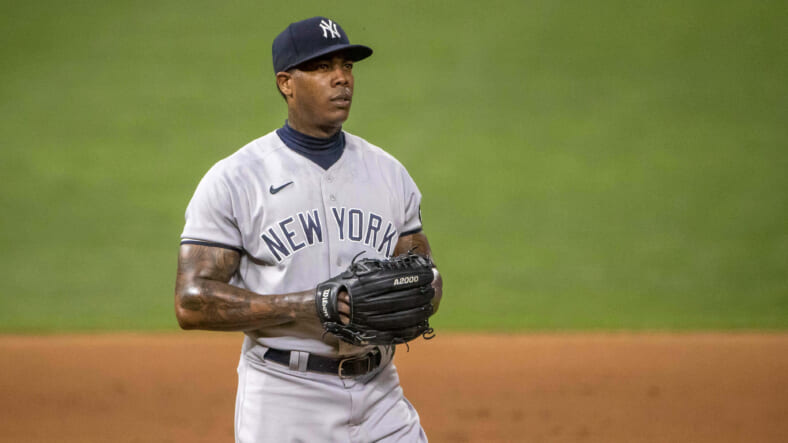 The New York Yankees are gearing up to take on the Seattle Mariners at 1:05 PM on Saturday, but they will be without closer Aroldis Chapman, who was placed on the 10-day injured list due to left elbow inflammation. Chapman, who has had a tough second half of the year, currently hosts a 3.63 ERA with 15.43 strikeouts per nine. He has five wins and three losses on the season, pitching 39.2 innings.

The Yankees have been relying on their bullpen tremendously as of late, with several starting pitchers fighting their way back to the team. Ace Gerrit Cole tested positive for COVID-19, Luis Severino was working back from my groin and Tommy John surgery, and Corey Kluber is nearing a return after suffering a teres major muscle strain.

General manager Brian Cashman did indicate that itâ€™s possible Severino and Kluber could return by the end of August, which is only a few weeks away. That would add a solid amount of depth to the rotation, taking pressure off the bullpen.

However, Chapman spending a few days rehabbing might end up being a positive thing for him, as heâ€™s nearly blown several saves over the last few weeks. He recorded a save on Thursday night but had runners on the corners and the go-ahead run at the plate. His fastball only hit 97 mph, whereas he normally hit 99+ before the MLB cracked down on the usage of sticky substances to help increase spin rate and velocity. It is quite odd that Chapman saw such a major decrease in efficiency the second the new rules were implemented.

In Chapmanâ€™s place, the Yankees activated Nick Nelson from Triple-A to help supplement his loss.

The Yankees are climbing the AL East standings:

With another victory on Friday, the Yankees find themselves back in the AL East race, sitting 5.5 games behind the Tampa Bay Rays. In the Wild Card, they are only 1.5 games back from the Oakland Athletics and 2.5 from Boston, as both the Red Sox and Rays lost their games on Friday.

Stringing together a few more wins would undoubtedly put them in the conversation to take the top seed in the East, and with a three-game series against a lowly Kansas City Royals team coming up, this is the perfect opportunity for them to blow the division open.