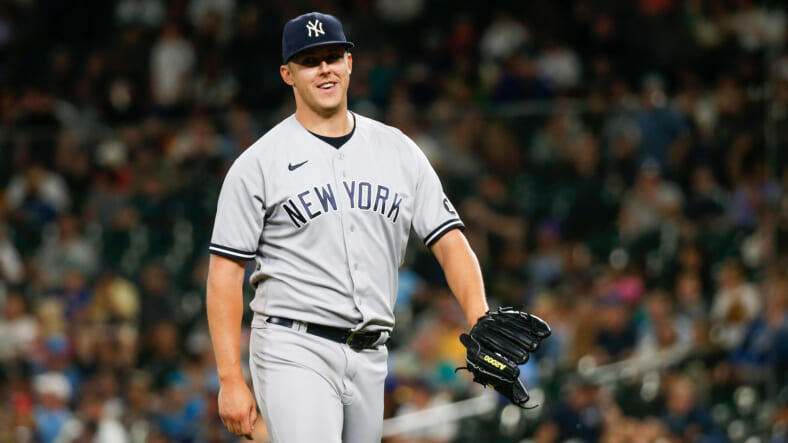 With the MLB lockout underway, all players can do is wait patiently for the owners and Players Union to find a new agreement. When it comes to the New York Yankees, they will be eyeing the beginning of a new free agency once the lockout ends. General manager Brian Cashman failed to make any moves prior to December 1, indicating a more active spring when things hopefully come to a conclusion.

In the meantime, players are unable to receive treatment from their team specialists and doctors, which could have health implications for next season.

Yankees’ starting pitcher Jameson Taillon changed his picture to a blank image as the MLB tries to rattle the Players Union for their desires. The players want the opportunity for big contracts earlier, whereas owners ideally like to keep as much money as possible, for obvious reasons.

Taillon took the opportunity to take a friendly shot at the MLB, indicating he wouldnâ€™t be able to work with his physical therapists from the team after receiving surgery on his ankle at the end of the 2021 season.

Since MLB chose to lock us out, i’m not able to work with our amazing team Physical Therapists who have been leading my post surgery care/progression. Now that I’m in charge of my own PT- what should my first order of business be? I’m thinking I’m done with this boot. It can go?

How did Taillon perform for the Yankees?

Taillon had a disappointing first year with the Yankees after being traded from the Pittsburgh Pirates prior to the 2021 season. He posted a 4.30 ERA over 29 games, recording a 8.73 strikeouts per nine rate, the highest of his career, and a 2.74 walk rate.

Taillon saw an increase in usage of his fastball and curveball compared to his 2019 season. His fastball hovered around 94 mph, the lowest of his career. It was clear that two seasons off after underoging his second Tommy John surgery impacted his performance, which was to be expected.

While his arm managed to escape unscathed, slightly tearing ligaments in his ankle forced the Yankees to rely on others when they needed Jameson at the end of the campaign. Hopefully, he can return to full health despite the lockout and not having his team doctors on hand.