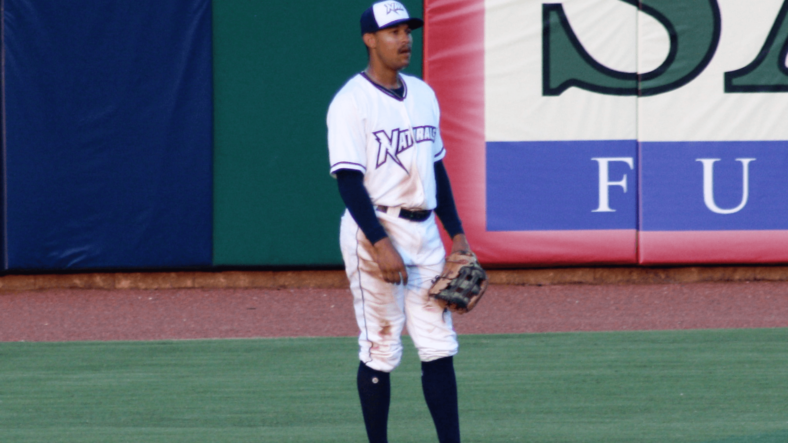 The New York Yankees are still unable to pursue Major League talent due to the lockout, but they have been active in the Minor League category, bringing on several players this past week to bolster their depth.

After the Yankees signed Ender Inciarte to a contract, they recently brought in former top outfield prospect from the Washington Nationals, Blake Perkins.

Perkins is 25-years-old and was once considered the No. 11 Prospect in Washingtonâ€™s farm system back in 2018, but he has since struggled to develop into a prominent player.

The versatile outfielder is known for his defensive efficiency and patience at the plate but lacks power and slugging ability, which is something the Yankees hyperfocus on with their players.

Here’s a look at Blake Perkins’s scouting report from 2019:

Drawing multiple comparisons to major league outfielder Jon Jay, Perkins best fits the profile of a fourth outfielder if he can make a significant improvement at the plate. Heâ€™s a glove-first player, a plus defender in center field with mature instincts, excellent routs and an above-average arm. He controls the strike zone well, as evidenced by his 15 percent walk rate, but his 22 percent strikeout rate indicates that he needs to make more contact in order to take advantage of his above-average speed. He has no power.

This past season, Perkins featured with Northwest Arkansas, a Kansas City Royals affiliate. Over 72 games, he hit .202 with seven homers and 30 RBIs. Historically, heâ€™s a lackluster offense threat, but his great arm strength in centerfield and solid defense make him at the very least a serviceable player.

It is highly unlikely Perkins ever features for the Yankees but given their injury issues the past few seasons, I wouldnâ€™t be surprised to see him pop up in the future. Nonetheless, the Bombers have a few prospects of their own they want to elevate, including Estevan Florial, who’s due to a legitimate opportunity in the bigs.