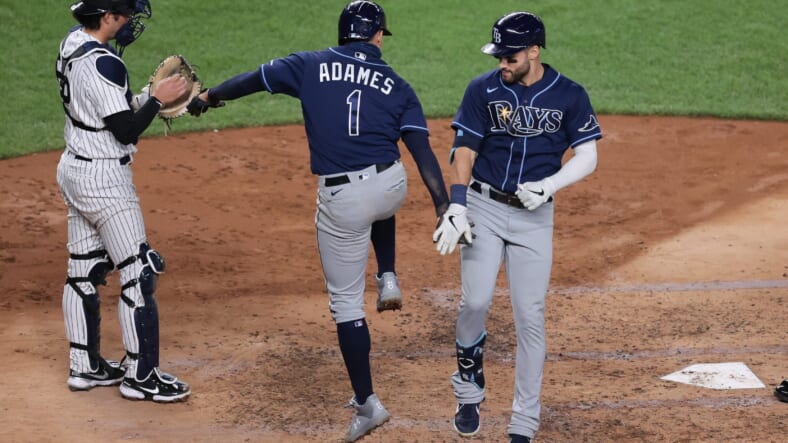 The New York Yankees and the Tampa Bay Rays have plenty of bad blood from the regular season, and it would be no surprise if it spilled over into the postseason.

Awkwardly, both teams are currently sharing the same hotel ahead of Mondayâ€™s opening game of the ALDS. It will be one for the ages, as both teams went back-and-forth this season, with the Rays earning the upper hand. They go into the series with an advantage and momentum, but the Yankees have a team that is virtually unstoppable when they are playing at the top of their game.

Earlier this year, the hostility began when closer Aroldis Chapman threw a 100 mph fastball at the head of Michal Brosseau. This sparked extreme animosity between the two teams, and it is clear that both dislike one another.

Rays outfielder Kevin Kiermaier didn’t hold back from expressing the truth: “The don’t like us, we don’t like them, and it’s going to continue to stay that way.”

Considering what went down, Iâ€™m not surprised that Kiermaier was openly negative toward the Yankees. His team got the best of the Bombers this year, and are arguably the best team in baseball, as outfielder Brett Gardner mentions.

â€œThey had a really good season, ran away with the division. Obviously, itâ€™s up to us to come out and play better against these guys,â€ Gardner continued.

Game one will feature two of the best pitchers in baseball, Gerrit Cole and Blake Snell. Cole was fantastic in his first post-season start in pinstripes. He lasted 7.0 innings, allowing two earned runs. He finished with a 2.57 ERA in the win over Cleveland in the Wild Card. Snell, on the other hand, was even better against the Toronto Blue Jays. He lasted 5.2 innings, striking out nine batters and allowing just one hit over 5.2 innings.

The major difference between the two was longevity. Cole managed to pitch almost two entire innings more than Snell but gave up two more runs. If the Yankees can remain patient and knock him out of the game early, they have a better shot at winning against the Rays.

The problem, Tampa has a stellar bullpen, and the Yankees struggle in that category. Their offense will need to be at the top of their game if they wish to walk away with a series win. Thankfully, theyâ€™re coming off a two-game sweep against Cleveland where they posted 22 total runs.