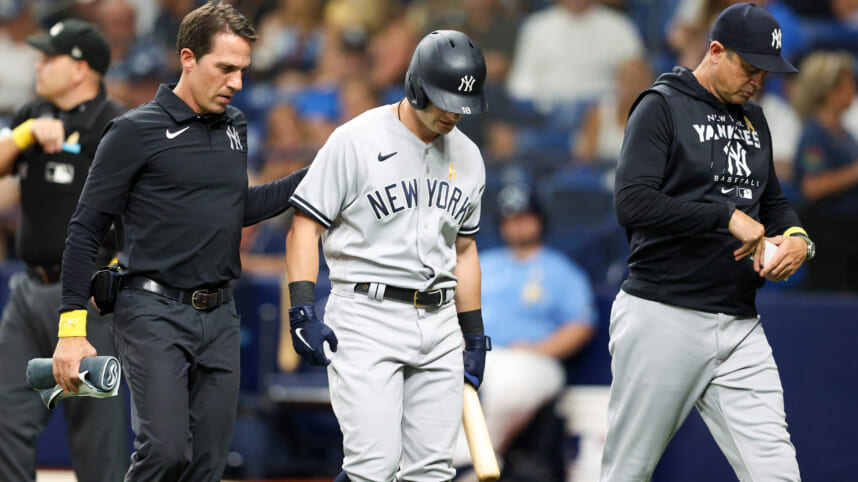 Following a devastating loss to the Tampa Bay Rays on Friday night, the New York Yankees are holding their breath with left-fielder Andrew Benintendi after sustaining a wrist injury, forcing him to leave the game.

Benintendi hurt his hand swinging on a fastball from pitcher Jeffrey Springs in the third inning. He immediately began grabbing at his right hand, walking straight to the dugout and preparing for more testing.

Benintendi is one of the few players the Yankees can’t afford to lose right now, given his consistent hitting. In August, he hit .254 with a 30.4% on base rate, which isn’t great in comparison to players like Aaron Judge, but those numbers are far exceeding guys like Gleyber Torres and Isiah Kiner-Falefa.

Benintendi enjoyed seven games with two hits or more, including a stretch between August 21 and August 25 where he put together four consecutive games of two hits or more.

After the game, manager Aaron Boone stated his disappointment for the injury, hoping the best for Benintendi, a player they desperately need down the stretch after being acquired before the trade deadline from the Kansas City Royals.

“Just unfortunate for him to have that happen,” Boone said. “Hope the best for him.”

Boone stated that Benintendi had numbness in some of his fingers on his right hand, which is certainly a bad sign. The likely injury is some sort of ligament pull that’s affecting a nerve in his wrist.

“Obviously a big one,” Boone said. “He’s obviously an important guy in our lineup right now. Especially as we struggle as much as we are right now offensively and things, but he’s been hitting the ball very well, and just hope for the best for him (Saturday).”

At a moment where the Yankees are struggling considerably to produce offensively, losing Benintendi is one of the last things they needed. Manager Aaron Boone has a tall task ahead of him, especially if Benny is forced to miss a significant amount of time.