Yankees have lowkey pitcher climbing the ranks, Volpe raves about his abilities 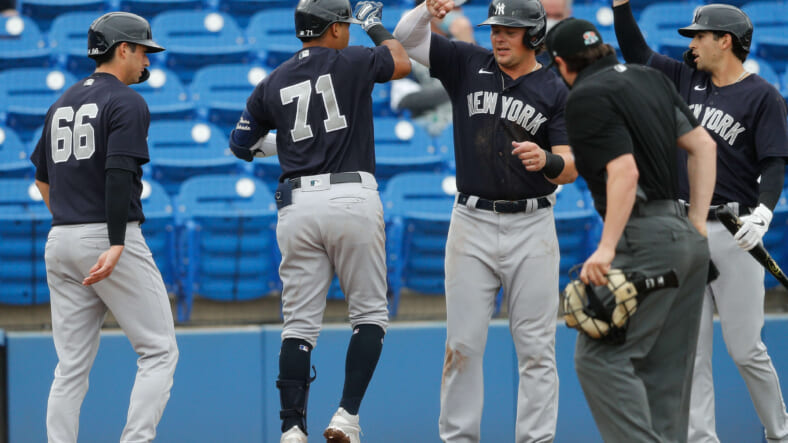 The Yankees have plenty of star prospects who grab headlines as a result of decisions from general manager Brian Cashman. Star shortstop prospect Anthony Volpe has been the talk of the town recently as the Yankees prepared to solve their vacant SS spot for the 2022 season.

Whether they go out and sign Carlos Correa to a massive deal or find a stopgap, Volpe is still a significant piece to the puzzle moving forward. However, the Yankees have a few low-key prospects climbing the system who may end up being productive players at the Major League level.

Volpe spoke recently about some awesome pitchers in the minors, one of which has quickly been climbing the ranks:

“In the organization, we have some amazing pitchers,” Volpe said on David Cone’s Toeing the Slab podcast. “I got to face a lot of them in spring training and Hayden Wesneski is nasty. Ken Waldichuk is a nasty lefty. That’s just two guys. But there’s a bunch.”

“Wesneski’s fastball stood out in college, but not for its velocity. His heater ranged from 88-95 mph with some of the best sink in the 2019 draft, which he created by using a low three-quarters arm slot and opening early in his delivery. He missed bats and induced groundouts while still showing the ability to control his fastball despite its well-above-average movement.

“Adding a mid-90s four-seamer to his lively two-seamer gives him a four-pitch mix that also includes a sweeping low-80s slider that moves in the opposite direction as his sinker and a fading changeup that shows flashes of becoming a solid offering. He has no problem throwing strikes and could be a No. 4 starter if he can refine his secondary offerings and upgrade his command. He also could move quickly as a fastball-heavy reliever.”

#Yankees No. 15 prospect Hayden Wesneski fans 14 in a complete-game one-hitter for the @SOMPatriots. pic.twitter.com/0ZGx5ntZui

This past year, Wesneski posted a 3.25 ERA featuring with single-A, AA, and AAA affiliates. He spent the most time with Somerset, logging a 4.01 ERA over 15 games, pitching 83 innings, and allowing just a .241 batting average for opponents.
Wesneski is still developing his pitches, but he has great spin-rate and break on his pitches, which is something the Yankees could lean on in the future if he continues to impress in the farm system.