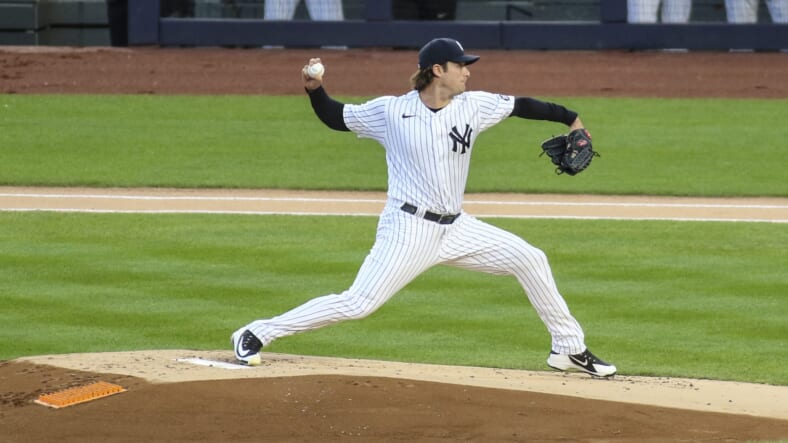 When looking at New York Yankees ace Gerrit Cole objectively, he is the best pitcher on the team and arguably in baseball. However, donâ€™t underestimate the effects a catcher can have on a pitcher, as we saw on Opening Day with Gary Sanchez behind the plate. It took only one contest for skipper Aaron Boone to realize that Sanchez isnâ€™t the right man behind the plate for Cole, who prefers Kyle Higashioka, a more defensive-minded option.

Unfortunately for Sanchez, it took him just one start with the Yankeesâ€™ top starter before losing his job for at least one day a week. In 2020, Sanchezâ€™s offensive struggles hurt him significantly, but his defense was also inadequate.

His poor performance forced management’s hand, as Kyle took over in the postseason and displayed solid attributes and consistency. Heâ€™s not the slugger that Gary is, but he makes decent contact and has a bit more upside left to un-tap.

With what clearly seems like a match made in heaven with Cole and Higashioka, Boone wasnâ€™t convinced that Sanchez should lose his opportunity catching the most talented pitcher on the roster.

â€œIâ€™ll pair them up Iâ€™m sure a fair amount,â€ Boone said of Cole and Higashioka. â€œBut I also felt like, especially going back to Opening Day, I felt like Gary and Gerrit were really good together. Iâ€™m comfortable with both guys.â€

Letâ€™s reflect on Opening Day for the Yankees, when Cole allowed five hits and two runs over 5.1 innings. For most pitchers, this would look like a great performance, but for Cole, his second outing of the year is what we expect.
On Tuesday against the Baltimore Orioles, Gerrit lasted 7.0 innings, not even breaking the 100 pitch mark. He allowed four hits and zero runs, striking out 13 batters in an absolutely dominant performance with his favorite catcher behind the plate in Higashioka.

Boone did state the pairing â€œhave a good thing going, a ying and a yang.â€

If I were Boone, I wouldnâ€™t mess with that combination since Cole clearly seems to prefer the alternative to Sanchez. Ultimately, the Yankees shouldnâ€™t hold any of their players back, especially one thatâ€™s capable of automatically winning them a game with incredible pitching performances.