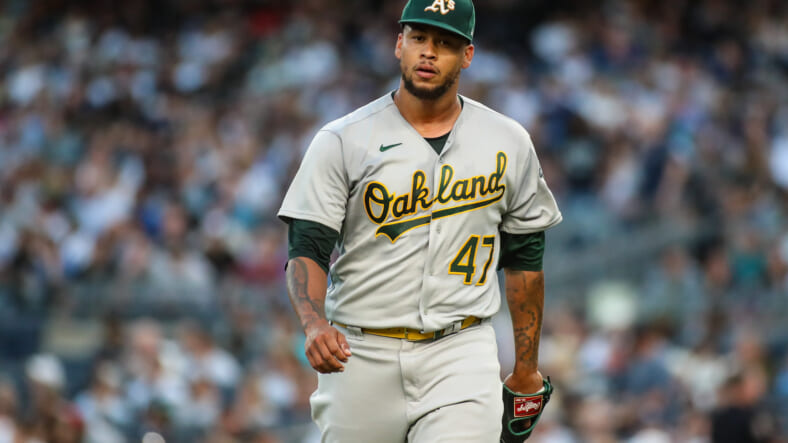 Losing Castillo was a significant blow given his reliability, but Montas still has the capability to provide the Yankees’ rotation with a major boost.

Multiple reports have indicated that general manager Brian Cashman is waiting patiently to see what the market looks like for Montas, who could land a top prospect given what Seattle offered up for Castillo.

Just one day ahead of the deadline, the Yankees undoubtedly have competition, meaning they will have to offer a more lucrative package.

According to Jim Bowden of The Athletic, the Yankees have competition for Montas:

With Luis Castillo traded to the Mariners, the A’s have the best starting pitcher on the trade market*, Frankie Montas, especially if his medicals check out as expected. The Yankees have made Montas their top trade target, according to sources, but they have plenty of competition for the 29-year-old right-hander, including the Twins, Cardinals and White Sox.

With the Twins, Cardinals, and White Sox in the mix, the Yankees have to be patient to see if they overpay for the star pitcher.

What would Frankie Montas bring to the Yankees?

Montas is set to become a free agent in 2024, so the Yankees would have him for the rest of 2022 and the entirety of next season at a cheap price point.

Frankie utilizes a 4-seam fastball, split-finger fastball, sinker, slider, and cutter. His split-finger is by far his best pitch, generating a .180 batting average against with a 33% WHIFF rate and 21% put-away rate.

In addition, Montas has a quality slider that feature 6.1 inches of horizontal movement, 39% better than the average pitcher. He’s also generating 33.2% of vertical movement with his slider, which represents one of his best low-contact pitches, producing a 38.6% WHIFF rate.

If the Yankees do end up missing out on Montas, Cashman could target Tigers lefty Tariq Skubal or Marlins right-handed pitcher Pablo Lopez. Over the next 35 hours or so, the market will likely move significantly, but Juan Soto is currently holding everything up given his monster price point.