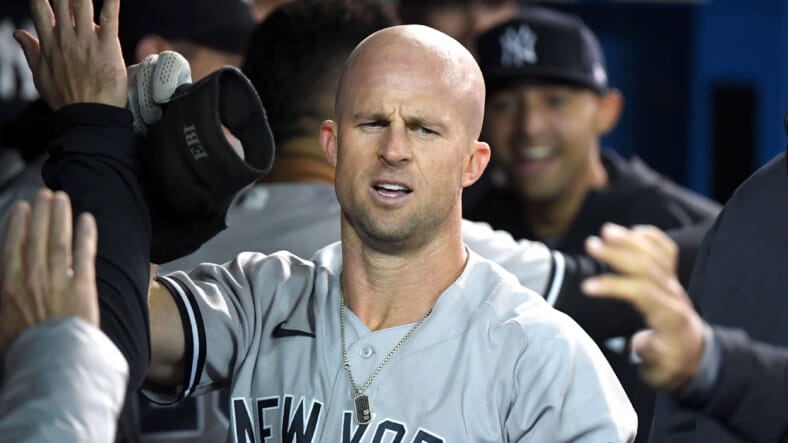 Once again, the New York Yankees stare down the Brett Gardner barrel as free agency looms in the coming months. After injuries in the outfield took hold during the 2021 season, the Yankees were forced to utilize Gardner far more than anticipated. In fact, they were likely happy offering him a new contract for two seasons. The deal paid him $2.85 million in adjusted salary with a player option in 2022 at $2.3 million.

It was interesting to see general manager Brian Cashman give Gardner the choice of sticking with the team next season or retiring. If Gardner elects to decline his player option, the team then has a $7.15 million club option, including a $1.15 million buyout.

The Yankees may prefer to keep Gardner around, given his veteran leadership and reserve qualities. However, they cannot depend on him to be a regular starter at this point in his career. Gardner played in 140 games this past season, posting a .222 batting average, the lowest of his entire career. He recorded 10 homers and 39 RBIs with a 21.7% strikeout rate and 13% walk rate. He posted a 1.4 WAR, hitting his highest ground ball rate at 45.2% since 2018. Â It is clear that Gardnerâ€™s power is decreasing exponentially — his hit with hard speed percentage dropped by 5% in 2021. His hit with soft speed increased by about 4%, indicating a drop-off in athleticism due to age.

Unfortunately for the Yankees, Gardner holds all the power in this scenario but paying him $2.3 million for 2022 wouldn’t be the end of the world financially. The Yankees are still expected to be heavily involved in the free-agent market, targeting a long-term solution at shortstop with potential transition services at third base.

If Brett elects to decline his player option, we should expect the Yankees to execute a buyout. With Aaron Hicks expected to return next year and Clint Frazier still in limbo, the Yankees could be considering a cost-efficient option in the outfield.

A few names that could pop up include Starling Marte and Juan Lagares, who spent 112 games with a Los Angeles Angels this past season, hitting .236 with a 23.2% strikeout rate. The Yankees aren’t going to spend big at outfield given the emergence of Giancarlo Stanton as a defender once again and the return of Hicks. Hopefully, Frazier will return from his unusual migraine issue, providing a more consistent option moving forward.