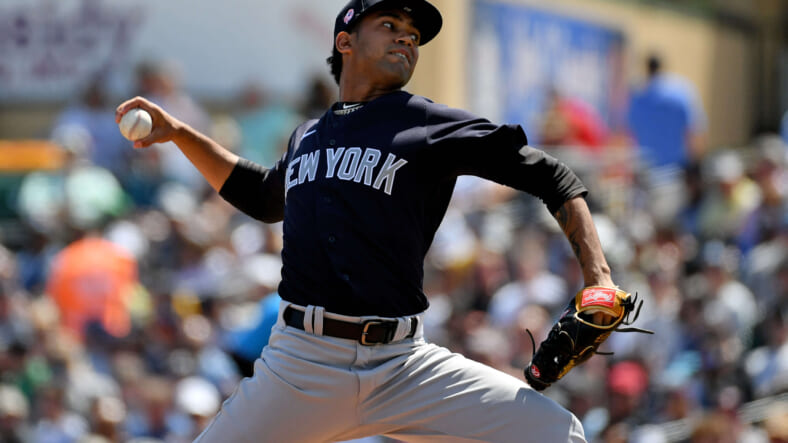 The New York Yankees took on the Detroit Tigers on Tuesday afternoon, falling 6-5. Featuring the majority of their starters, the offense was powered by several home runs â€” Jay Bruce and Gary Sanchez, who have been enjoying a phenomenal spring so far.

However, the pitching faltered after Deivi Garcia struck out five batters and allowed to hit over 3.0 innings.

The good news, young starter Garcia, looked phenomenal in his second appearance of spring training. As he competes for the fifth spot in the starting rotation, his latest bid certainly impressed the coaching staff.

His dangerous curve and accurate fastball have opened a few eyes, and at 21 years old, GarcÃ­a is quickly justifying himself as a potential mid-rotation starter. Garcia is going to have to fend off Domingo German, who has also looked good this spring, but the Yankees have one of the best problems in baseball, too many good pitchers. Itâ€™s been a while since weâ€™ve been able to say that regarding the starting rotation.

Offensively, Bruce is having himself a great start to his tenure with the Bombers, hitting multiple home runs in the first eight games of spring training. Bruce is showing that he should be on the active roster, and we all know how much the Yankees prefer sluggers.

â€œI know Iâ€™m good enough to be on the roster,â€ Bruce told reporters several days ago. â€œThereâ€™s no question, personally, about that in my opinion.â€

The bad news is quite significant, as relief pitcher Zack Britton suffered an elbow injury during a bullpen session on Monday. He was sent to New York for more testing, and the results came back with poor news.

Britton will undergo arthroscopic surgery to remove a bone chip in his elbow, which luckily wasnâ€™t Tommy John surgery. He will miss at least six weeks but will be able to re-join the team after his rehabilitation is finalized. This couldâ€™ve been much worse, so the Yankees got away with one, but injuries starting to pop up at significant positions is a bit concerning.

Yankees reliever Zack Britton will undergo arthroscopic surgery to remove a bone chip from his left elbow. Expected recovery time is typically at least a month — usually more — and Britton will need to ramp back up before returning.