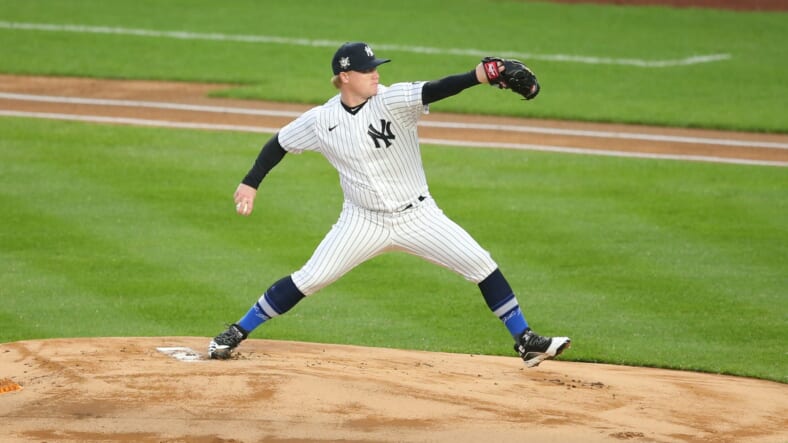 Another day, another loss for the New York Yankees. Falling 2-8, the Tampa Bay Rays in the first game of a weekend series, the Bombers are in true demise. After calling on Nick Nelson to start the game, he lasted just 1.0 innings, allowing two hits and two earned runs. His supplement, Michael King, had a stellar performance, though, lasting 3.0 recordist four strikeouts, not allowing a run.

However, the Yankees’ offense remains extremely inefficient, scoring a combined nine runs over the last three games. An unfortunate string of losses for the Yankees has begun to create pessimism around skipper Aaron Boone, who doesnâ€™t seem to offer any good answers to the media or motivating words. Most of the time, he says, â€œitâ€™s not good enough,â€ which simply isnâ€™t a good enough answer for the fans either.

Boone reportedly offered an earful to the team following the loss, according to Clint Frazier and Giancarlo Stanton.

The biggest positive surrounding the loss was the performance of Michael King, who was called on the alternate site to help aid a fatigued bullpen. His performance over three innings was exactly what they needed, but Luis Cessa and Lucas Luetge allowed three earned runs and six hits over the final five innings, which isnâ€™t entirely poor, but not exactly with the Yankees needed with a floundering offense.

Offensively, DJ LeMahieu went 0-for-4, Aaron Judge 0-for-4, and the team compiled 14 total strikeouts to post another dud. Only Gleyber Torres and Giancarlo Stanton recorded hits, allowing Michael Watcha to last six innings despite having a 4.20 ERA. A potent Yankee offense is simply falling apart at the seams, as they desperately lack efficiency in the middle of their lineup, and the end has been disastrous. Clint Frazier struck out three times over three plate appearances, furthering his awful start to the 2021 campaign.

In fact, Boone has already suggested reducing Frazier’s playing time, mentioning Brett Gardnerâ€™s injection into leftfield. The entire atmosphere around the Yankee organization is damp, and they desperately need someone to save the day and spark a positive swing. Aaron Judge tried his best, launching two home runs against Toronto in a 5-4 several days ago, but it simply wasnâ€™t enough.