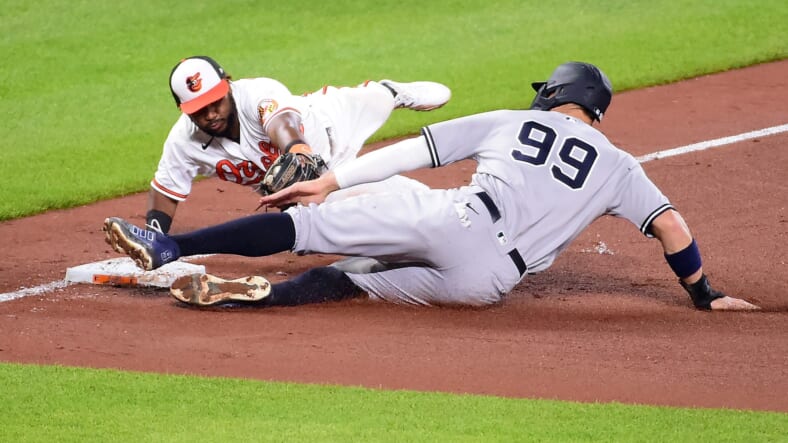 The New York Yankees continue to embarrass themselves, even against lowly competition like the Baltimore Orioles, who emerged victorious in a 4-2 contest on Monday evening.

The Yankees now sit 9-13 on the season and have an offense that couldnâ€™t get going if you paid them, oh wait. Theyâ€™ve scored just five runs over the last three games, and itâ€™s not for a lack of pitching they continue to lose. The team only allowed four runs against Baltimore in the loss, and that is a number the Yankees would demolish in the past.

However, whether it be teams figuring out how to shut down the Yankees or a simple cold streak to start the season, there have been too many issues to count, and multiple positions that were viewed as strengths return as weaknesses.

It took Yankees youth Prospect Deivi Garcia just one outing to be sent back down to the alternate site, which might be a bit premature and demoralizing for his confidence. He currently holds a 4.50 ERA and fared much better than Domingo German did in his first appearance this season. He lasted 4.0 innings, allowing three hits and two runs, picking up four strikeouts. While he did walk three batters, Garcia wasnâ€™t awful but did struggle a bit with his location at times.

Altogether, I believe Garcia should earn another opportunity, especially since German struggled over several appearances and didnâ€™t prove his worth after dominating the spring and beating out Garcia for the fifth spot in the rotation.

The offense didnâ€™t produce much of a spark either, as they recorded just four hits on the afternoon, with Aaron Judge being involved in both scoring/attempt plays. A double to left field in the sixth inning drove in Giancarlo Stanton, but Judge was thrown out at third base, a cardinal sin late in the game on the Yankees needed run production.

The reality for this team is simple — if they are not hitting home runs, they are struggling to put runs on the board. Contact hitting isnâ€™t their strength, as their baserunning continues to prove skeptical, and some of their more refined players continue to struggle. DJ LeMahieu currently has a .250 average on the season and Stanton .192. At some point, skipper Aaron Boone is going to have to make a decision on Gary Sanchez, who has dropped all the way to the eighth slot in the batting order and is currently hitting .182, striking out twice against Baltimore.

With the Yankees trying to save money this past off-season, they took a few chances on players they believed in, and so far, it has backfired tremendously. Hopefully, more live-action and time will give them an opportunity to turn things around, but their offense needs to blow open one way or another.