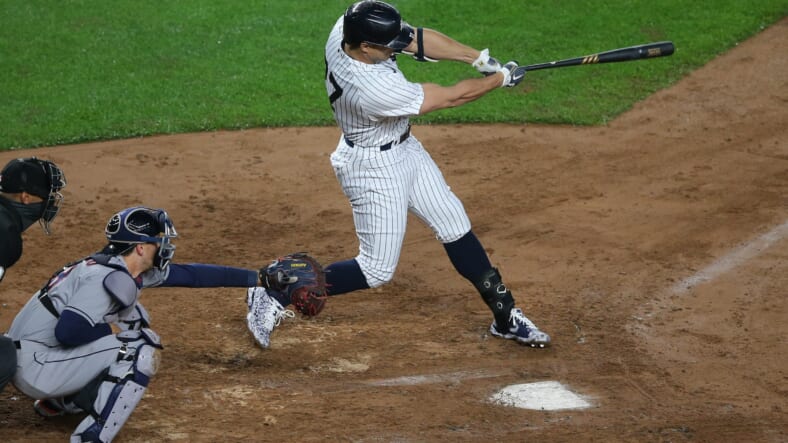 Any time the New York Yankees can steal a victory over the Houston Astros, it represents a huge motivational booster. The Yankees won the second game of a three games series on Wednesday evening, thanks to more Giancarlo Stanton production.

Buy a score of 6-3, the Yankees are now two games above .500 as their offense finally begins to show signs of life. In the victory, Stanton raised his batting average to .310 and slugging percentage to .590. He recorded three hits and four RBIs, including a home run, a double, and single.

In addition to Stanton’s superb outing, the pitching also looked adequate, as Jordan Montgomery lasted 6.0 innings, giving up eight hits and three runs. Iâ€™m sure he gave up a few too many hits for his liking but got the job done allowed the bullpen to close out the win.

Of course, the good news is that Stanton seems to be playing at an All-Star caliber level. After injuries have derailed him the past few seasons, it is nice to see Stanton taking good swings and connecting on long balls regularly.

So far this season, Stanton has eight home runs and 22 RBIs over 105 at-bats, which is a stellar statistical output. If he continues to play like this, the Yankees will be in good shape moving forward. As for the bullpen, Jonathan LoÃ¡isiga seems to be blossoming before our eyes, as he currently hosts 60.9 an ERA and has allowed 11 hits over 18.1 innings. Heâ€™s averaging one strikeout per inning and has only given up one home run. This is exactly the step the Yankees needed to see, especially with Zack Britton out and Darren O’Day recently going down with an injury.

The only real negative on the evening was Aaron Judge, who struck out in all five at-bats. It seemed like an off night for Judge, but his teammates rallied around him and picked up the slack, which is exactly what we expect from a team laden with powerhouse offensive weapons.

The Yankees now prepare for the final game of the series against Houston on Thursday afternoon, and theyâ€™re hoping starting pitcher Gerrit Cole can lead them to a sixth consecutive victory.