Yankees: Giancarlo Stanton speaks on walk-off single versus the Nationals 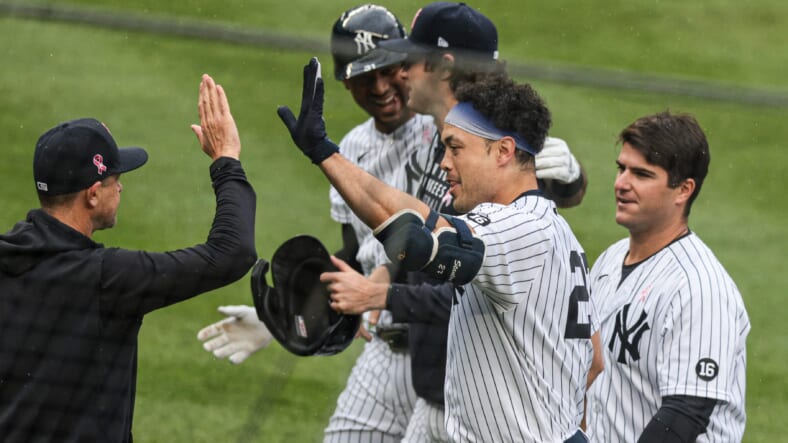 The Yankees took down the Nationals yesterday by a score of 3-2. It was a well-pitched game on both sides as neither team lit up the scoreboard. However, the Bombers were able to outlast Washington and secure the series victory.

The Yankees’ offense was slow. They couldnâ€™t seem to provide German with any kind of run support. Their first hit of the game was an RBI single by Hicks in the third. That gave New York a 1-0 lead. It wasnâ€™t until the sixth that the Yankees would score another run. Gleyber Torres smashed his first home run of the season into the left-field bleachers. That gave the Bombers a 2-0 lead.Â

After that, German gave up a two-run shot to Kyle Schwarber which tied the game. German was phenomenal the entire day and just slipped up at the end. He was taken out and Michael King finished the inning in relief.Â

The game remained locked up at two as they headed into the bottom of the ninth. The Nationals looked to their closer Brad Hand to keep the game tied. Hand was in a similar situation on Saturday in which he blew a save in the ninth. However today, Hand was just trying to keep the team’s hopes alive.Â Â

Tyler Wade walked to begin the ninth and the Yankees pinch-hit Aaron Judge for Brett Gardner. Judge had a great at-bat in which he also walked. DJ LeMahieu was up with Tyler Wade in scoring position and hit a soft grounder to third. Castro threw Judge out at second but LeMahieu was able to beat the throw at first. That means Stanton was up with men on first and third with only one out. Stanton ripped a single through the left side and walked it off for New York.Â

Giancarlo Stanton talked to the media following his walk-off single. He said that he â€œlovesâ€ moments like that. Saying that coming through for his team was â€œbig time.â€ He said he had a chance â€œearlierâ€ that he â€œdidnâ€™t capitalize on.â€ But, Stanton said it was â€œgreatâ€ to secure it the second time. â€œWhen you win those games that are right down to the wire, itâ€™s big for everybody.â€Â

Another series win for Giancarlo Stanton and the Yankees. They finished 7-2 in their homestand and improved to 18-16 on the year.

Following an off day today, the Yankees will head to Tampa to face the Rays in a three-game set. New York has struggled tremendously against Tampa Bay and will look to build on their recent success. Tune in tomorrow at 7:10 pm EST to catch the first game of the series.Â