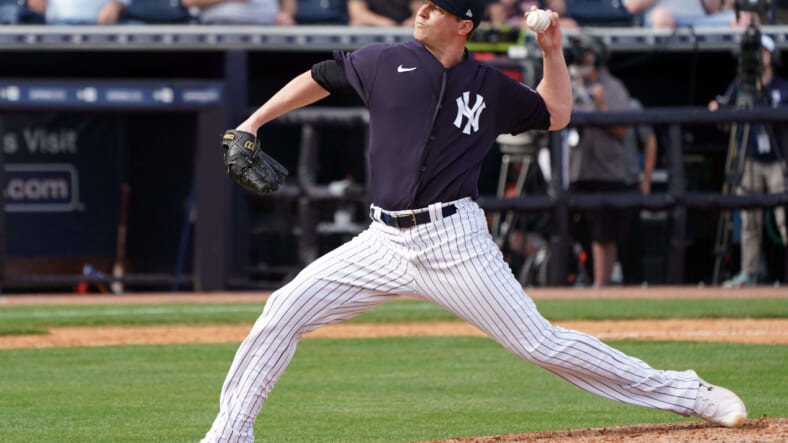 With the sheer amount of injuries in the bullpen, the Yankees are finally getting some reinforcements on the way. They recently lost Scott Effross to a shoulder strain after losing Albert Abreu and Clay Holmes.

With the Yankees lacking arms with closer experience in their bullpen, Zack Britton’s return is far more important than initially perceived. Luckily for them, the 34 year old LHP is beginning a rehab assignment with the Tampa Tarpons tomorrow, according to YES reporter Meredith Marakovits. It’s been a long time coming for the former all-star closer, but he’s finally going to have a shot to carve out a roster spot for himself in October.

The Yankees have been in need of high-leverage arms with their top arms out, and Britton could be the guy Boone goes to in the 9th inning if he comes back healthy.

Zack Britton struggled heavily in 2021, but there are signs that Britton’s struggles were due to a lack of comfort on the mound. Batters still struggled to elevate the ball against Britton (68.0% GB%) and batters didn’t make quality contact against Britton either (31.3% Hard Hit%), however Britton’s decreased velocity in 2021 from 94.8 MPH to 92.6 MPH allowed batters to slug more against his sinker, all while he was unable to find the strike zone consistently.

Zak Britton threw under 30% of his pitches in the strike zone, down from ~35% in 2020 when his ERA was well under 2.00. The Yankees getting Britton to find the strike zone more consistently and having a ~2:1 K:BB ratio should allow him to find great success as he’s never been walk-averse, rather the walks haven’t come back to bite him because he gets so many groundballs and double plays. Steamer projects Zack Britton to post a 3.60 ERA, and that level of production could be a solid addition when you consider he has reps as a closer down the stretch.

The Yankees Don’t Need to Rely on Zack Britton

One thing that the Yankees can say confidently is that they don’t need to rely on him; he is a luxury for this team. They have a lot of arms returning from the Injured List over the next few weeks, and their current bullpen is still pretty solid.

If he doesn’t pan out, the Yankees could just cut bait and DFA him because he’s a free agent at the end of the season. If he pans out, this bullpen might be the best in the sport bar none. The sinker/slider combo are still grading well in terms of pitch movement, but we’ll have to wait and see what the velocity is at in the rehab assignment and the MLB level before we have any confidence levels for his performance.

Zack Britton could change this bullpen’s outlook, or not impact them at all, but the upside here should excite all Yankee fans as they try to survive a West Coast trip without their top bullpen arms.