Yankees get back one flamethrowing relief pitcher before Texas series 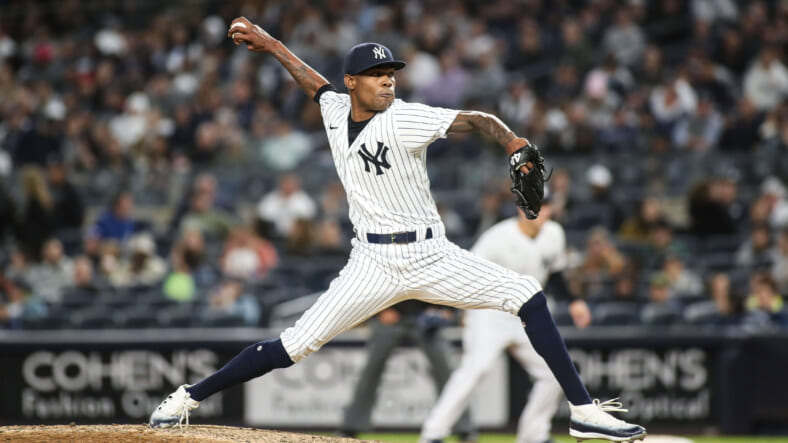 The New York Yankees are already dealing with a thin bullpen, currently without Clay Holmes, Wandy Peralta, and Ron Marinaccio suffering a shin injury during Sunday’s game. However, they are getting arms back, piece by piece.

The team announced on Monday afternoon that flame-throwing bullpen arm Miguel Castro would be reinstated from the 60-day injured list, with the corresponding move being Chi Chi Gonzalez designated for assignment.

The Yankees needed support badly, and Miguel Castro could help:

Castro hasn’t made an appearance since July 10 against the Boston Red Sox, fighting a shoulder injury. In his most recent start, he gave up two earned runs and a walk in less than an inning, elevating his ERA from 3.33 to 4.00.

However, there is value to Castro’s return, especially since the bullpen could use another arm to mitigate fatigue down the stretch. The Yankees only have one regular season series left to play before the playoffs commence, and if Castro looks the part, it is possible he makes an impact in the postseason as well.

Taking a look at his previous numbers, Castro made 32 appearances with the Yankees after being acquired from the New York Mets before the season began. He hosts a 4.00 ERA, 4.04 xFIP, 10 strikeouts per nine, and 4.33 walks per nine. He’s also earned a 68.9% left on-base rate and a 46.6% ground ball rate. He’s actually posted the best numbers regarding limiting home runs in his career, but that hasn’t managed to keep his ERA down to a serviceable level.

Castro is known for his slider, sinker, and change-up pitch sequence. He throws his slider 45.2% of the time and sinker 36.2% of the time. He tosses in his change up at 18.6% but has seen a significant increase in slider usage compared to previous seasons.

Given the inadequacies with his sinker, generating a .375 batting average against and .708 slugging percentage, it is no surprise that pitching coach Matt Blake decided to shift his sequence a bit.

However, he does get tremendous velocity on his pitches, averaging out at 97.9 mph with his sinker, and throws a 92.4 mph change up, which is tremendous. In fact, his change-up generates 11% more vertical movement than the average pitcher and 9% more horizontal movement. It is one of his most underutilized pitches — maybe he will try to incorporate it a bit more upon his return.

Nonetheless, it is a major positive that the Yankees are getting a bit healthier in the bullpen, a unit that could absolutely use the support.