Yankees Game One loss falls on the shoulders of Aaron Boone 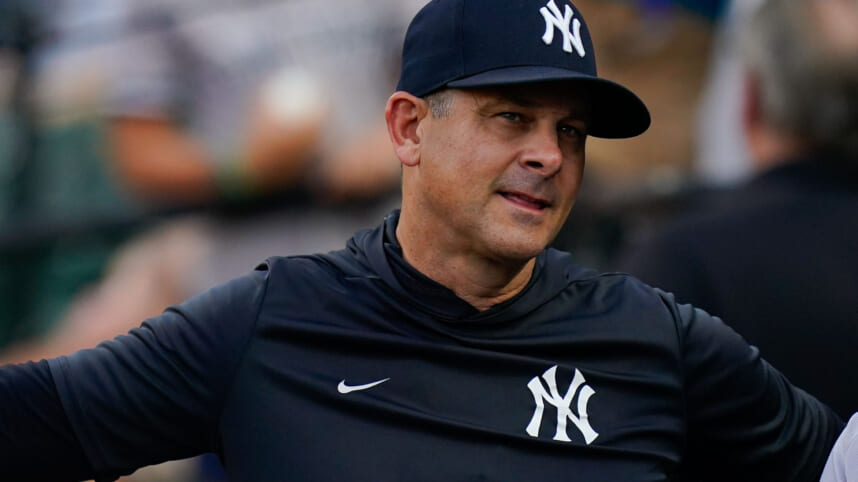 The New York Yankees lost the ALCS opener against the Astros this evening by a 4-2 score. New York was tasked with taking on soon to be three-time Cy Young award winner Justin Verlander and they countered with Jameson Taillon.

Aaron Boone’s decision making was called into question before the game even started. New York announced that Oswald Peraza was on the ALCS roster which led many fans to believe he would be starting at shortstop. However, Boone stuck with Isiah Kiner-Falefa over both Oswald Peraza and Oswaldo Cabrera.

Nevertheless, fans rolled with it as the game got underway. The Yankees jumped out to a 1-0 lead early on. However, Houston countered right back tying the game. The Yankees had runners on second and third with one out and Josh Donaldson at the plate. He struck out on three pitches before Matt Carpenter struck out as well.

Boone decided to start Matt Carpenter who was making his first start since injuring his foot in the middle of the season. Before tonight, he had two plate appearances in the playoffs striking out in both. Yet, Boone put him in there to start against one of the best pitchers in the world. Carpenter ended up going 0-4 with four strikeouts while looking like a guy who hadn’t played in months.

Jameson Taillon wasn’t great, but he hung in there and gave the Yankees a chance. In the fifth inning, he allowed a runner to reach which forced Boone into action. Boone decided to go with Clarke Schmidt. The last game Schmidt was seen pitching in he was blowing the save against Cleveland in game three of the ALDS.

They issued an intentional walk to Yordan Alvarez and then Schmidt walked Alex Bregman. Bases loaded with one out and he was facing Kyle Tucker. Schmidt gave it his all and got Tucker to ground into an inning ending double play. He was pumped and so were the Yankees.

1-1 heading into the sixth. Sounds like a good time to start bringing in your best relievers right? Instead, Boone sticks with Schmidt who proceeds to give up back-to-back solo home runs to make the game 3-1. Lou Trivino came in to clean up the mess and get to the seventh.

A two-run game is within reach so you want a solid reliever in the seventh right? Well, Boone decides to throw an incredibly rusty Frankie Montas into the game. Montas proceeded to give up a solo homer to the first batter he faced.

Trailing 4-1, Anthony Rizzo would go on to hit a solo homer in the eighth to draw the Yankees back to within two. Sure would’ve been nice to be just down one or none at all. Then, two batters reached with two out. The Yankees were set up with the go ahead run at the plate in the form of. . . Matt Carpenter.

If you read above, you know what happened. Carpenter whiffed on breaking balls he couldn’t lay off all night and the Yankees went down. Nobody reached in the ninth and the bombers fell 4-2. Completely inexcusable decision making from Aaron Boone.

If you want to experiment with guys in the regular season, that’s fine. Doing it in the ALCS when the game is still within reach is unacceptable. I was listening to the YES Network’s post-game show and heard Michael Kay say the Yankees were trying to steal game one without using their best relievers.

This line of thinking aligns with Boone’s decision to not go to Clay Holmes in game three of the ALDS. Boone isn’t managing like it’s October. He’s managing like the Yankees are on the way to October and so far it’s cost them two games. Fortunately, they came back and beat Cleveland. However, Houston is a different animal and now you have to pray that Luis Severino can help tie this series up.