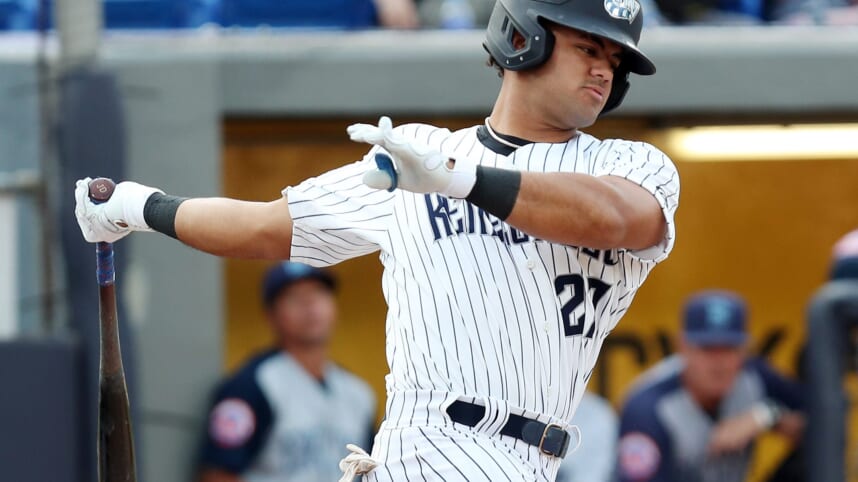 The New York Yankees struck out trying to acquire Luis Castillo from the Cincinnati Reds, settling for Frankie Montas of the Oakland Athletics instead. The Seattle Mariners gave up several premium prospects in exchange for Castillo, who’s been lights out since the acquisition.

However, Montas struggled in his first appearance with the Yankees, giving up five hits and six earned runs over just 3.0 innings of play. It was interesting to see who the Yankees considered dealing to Cincinnati in exchange for Castillo, which could give us a bit of insight into the team’s future moves during the winter months.

The Yankees tried hard for Luis Castillo, offering top prospect Jasson Dominguez in packages, according to sources. Nevertheless, they held firm on Anthony Volpe, and possibly also Oswald Peraza, two of the Reds’ targets, and Cincinnati ultimately decided they preferred the Mariners’ four-prospect offer that included Noelvi Marte. Castillo has now shut down the Yankees twice since the deadline.

Dominguez was recently elevated to High-A Hudson Valley after spending 75 games this season in Tampa in Low-A. He featured a .266 batting average with a 37% on-base rate and a .440 slugging rate during his time with Tampa. He also contributed nine homers, 36 RBIs, and 19 stolen bases.

Domgineuz is flying through the Yankees’ farm system:

The Yankees are already seeing how dominant Dominguez can be in Single-A ball, featuring a switch-hitting bat and five tool attributes. Defensively, he has stellar range, despite recording a .954 fielding percentage this season with Tampa, including six errors. Clearly, there’s still a lot left to improve, but Dominguez is making an early impression with his phenomenal batting metrics.

Moving forward, the Yankees could utilize him as a premium trade piece down the road, especially if a team like the Los Angeles Angle seriously considers trading Shohei Ohtani this upcoming winter.

We have learned that the Yankees are willing to give up Dominguez but are keen on protecting Anthony Volpe at all costs.