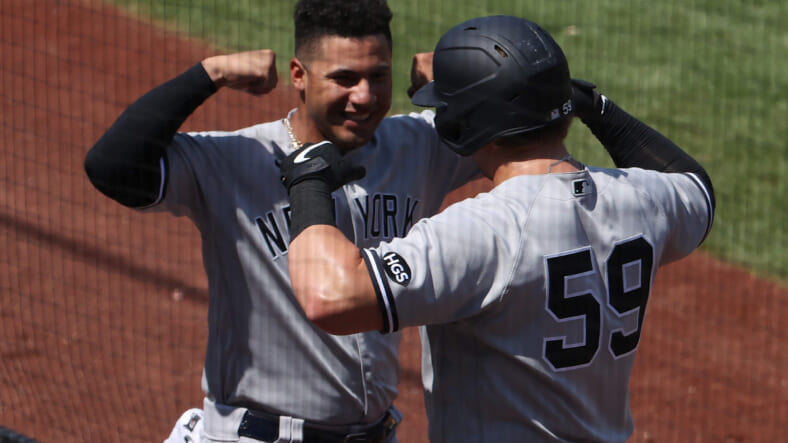 Itâ€™s bold predictions time here at Empire Sports Media! The New York Yankees will open the season in a few days, so why not starting the week with some potentially controversial guesses that may seem far-fetched, but are entirely plausible.

A series of unfortunate injuries in his knee, quad, shoulder, and calf have derailed the better part of Giancarlo Stantonâ€™s last two seasons with the New York Yankees. Some fans are eager to remind him about the injuries, but truth be told, they arenâ€™t his fault.

If he is healthy enough to play at least 140 games, he will more than likely surpass the 40-homer threshold. The 140 games is the bold part of the prediction.

Gleyber Torres will lead the Yankees in home runs

Before slumping in 2020, Torres hit 38 home runs in 2019 for the Yankees, in 144 games. He is putting quite a power exhibition in spring training, is just scratching his vast potential, and unlike last season, he reported in top shape for the 2021 season.

Gleyber Torres is primed for a huge season, and it could be good enough to lead the Yankees in home runs with over 40 bombs. In fact, Iâ€™ll go ahead and forecast 44. We will revisit after the season.

Jordan Montgomery will be the second-best pitcher by WAR

In a team with Gerrit Cole, Corey Kluber, Jameson Taillon, Domingo German, and Deivi Garcia, being a top-2 WAR pitcher seems extremely tough. But, you know, itâ€™s not so bold since Jordan Montgomery already did it in 2020: his 0.9 WAR, according to Fangraphs, put him in the Yankeesâ€™ second place behind Gerrit Cole and his 1.5.

If everyone throws the same amount of innings, then Kluber, German, and maybe Taillon should finish higher than Montgomery in the WAR ranking, but the Yankees will monitor their innings, as none of them threw many innings in the last two years.

Nick Nelson will enter the circle of trust

After having a pedestrian 4.79 ERA last season, the Yankees didnâ€™t exactly count on Nelson as a high-leverage weapon. But a great spring in which he has managed to cut his walks, and a couple of openings in the roster due to injuries have opened some avenues and innings for the talented righty.

I am predicting that Nelson takes advantage of his opportunity and not only secures a job to start the season, but also managed to find himself in Aaron Booneâ€™s circle of trust come playoff time.

The Yankees will win the World Series

Seeing the improvements that the Mets, White Sox, Padres and Dodgers made to their respective Dodgers, this prediction may seem bold enough. But the Yankees improved, too, and they will eventually have Luke Voit and Luis Severino back.

I see the Yankees getting past the competition in the American League and defeating the Los Angeles Dodgers 4-3 in a highly contested World Series. Call me crazy, but I can see that.