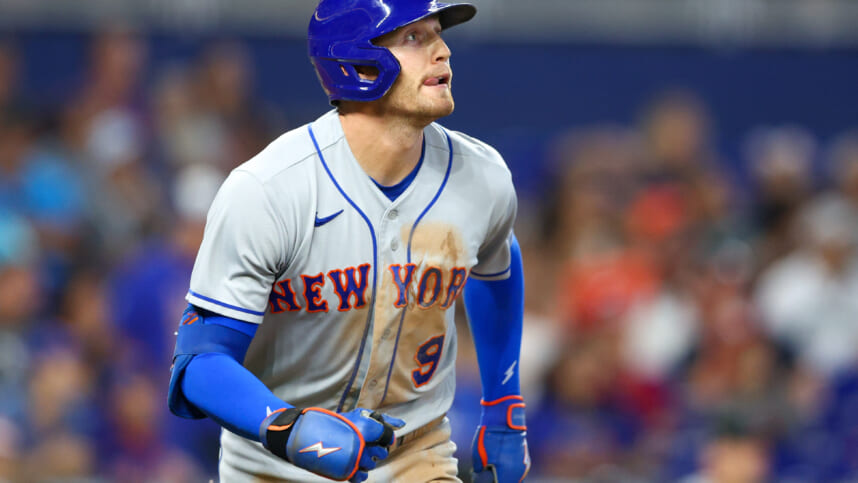 The New York Yankees might be hyper-focused on retaining Aaron Judge, but that won’t keep the front office from inquiring about other free-agent players looking for new homes. The Bombers have already been connected to a myriad of players this off-season, and having extended Anthony Rizzo to a three-year contract on Tuesday afternoon, they seemingly already kicked off their spending.

However, general manager Brian Cashman could be looking to invest heavily in the outfield, especially if he manages to offload the contract of Aaron Hicks, despite his confidence in the veteran.

Hicks is set to earn $10.5 million for the 2023 season, so recouping a bit of that salary would go a long way toward investing at other spots. Notably, the Yanks have interest in former New York Mets outfielder, Brandon Nimmo, according to Jon Heyman of the New York Post.

What would Brandon Nimmo bring to the New York Yankees?

Nimmo is coming off a fantastic season for the Mets, hitting .274 with a 36.7% on-base rate. In fact, this is the first time since 2019 that Nimmo dipped below a 40% on-base rate, showcasing his patience at the plate and ability to get in a scoring position.

Over 151 games, Nimmo slapped 16 homers with 64 RBIs, a 10.5% walk rate, and a 17.2% strikeout rate. He earned a 134 wRC+, showcasing impeccable offensive capabilities with good defensive numbers as well. Nimmo primarily featured in center field for the Mets, playing 1,282.1 innings there. However, Cashman acquired Harrison Bader at the trade deadline from the St. Louis Cardinals to play CF in 2023, so Nimmo would conceivably move to left field if the team manages to retain Aaron Judge as well.

Nimmo has played 870.1 innings in left field over the course of his career, committing just one error back in 2016. The 29-year-old outfielder has outs above average in the 90th percentile and arm strength in the 72nd percentile, indicating some good qualities. His outfielder jump ranks in the 34th percentile, meaning he doesn’t get the best jump on balls to the outfield, but he makes up for it in other ways.

Offensively, Nimmo ranks in the 90th percentile in chase rate, 84th percentile in sprint speed, and 80th percentile in whiff rate. He’s extremely patient in the batter’s box and completely dominates against fastballs with a .290 average over 345 at-bats this past season. Against breaking stuff, he hit .267 with 43 hits over 161 at-bats.

Aside from Judge, Nimmo is likely one of the better outfield options on the market, but I can’t imagine the Yankees overspending at another outfield spot with Oswaldo Cabrera rising to the occasion in 2022.

Scouting Brandon out seems to be more of an alternative if they miss out on Judge, but he obviously offers some quality numbers and would be an asset. Nonetheless, he wouldn’t even come close to replacing the impact Judge had on the Yankees.