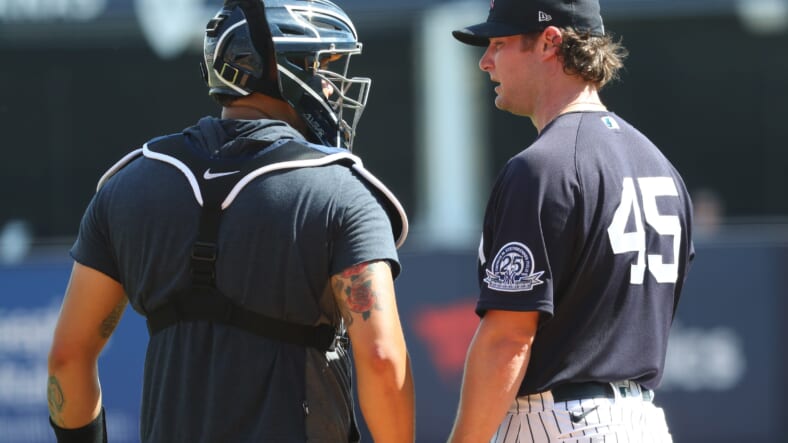 There is no question that New York Yankees ace Gerrit Cole will earn the first start of the regular season in 2021. The major question leading up to Opening Day was who would be catching. Last season, Cole seemed to prefer Kyle Higashioka as his personal catcher, with better blocking abilities and defense behind the plate. However, the Yankees, specifically skipper Aaron Boone has all but confirmed Gary Sanchez will be the starter on day one.

“I would expect Gary to be behind there on Opening Day,” Boone said via Zoom.

Sanchez signed a one-year, $6.35 million extension for the 2021 season, and this could be his final opportunity to showcase he can be a long-term solution at catcher for the Yankees. After struggling considerably last season, his teammates have since rallied behind him and provided examples as to why he can be a totally different player moving forward. This spring, Sanchez has come crashing back down to earth after starting strong, hitting .194 with three homers and four RBIs over 31 at-bats.

Sanchezâ€™s 2020 season was abysmal, as he recorded a .147 average with 10 homers and 24 RBIs. He recorded a career-high 36% strikeout rate and a negative WAR for the first time. Overall, the Yankees are giving him one final opportunity to salvage his career in pinstripes, otherwise, they will have to make a difficult decision and move forward without him. He struggled so much last year, they had no choice but to utilize the Hogashioka in the playoffs, with a very little sample size to justify this decision on.

However, Sanchez has been working diligently to refine his fundamentals and take a step forward. Hitting a few homers the spring has given him a bit of confidence, and over a larger sample size, he should take a step in the right direction.

The Yankees donâ€™t need minimal progress, they need to see a productive player who is worth paying large dollar amounts to. If he can replicate even his 2019 season where he hit 34 HRs and recorded a .232 average, it might be enough to justify a long-term contract. At this point, though, heâ€™s on thin ice and must prove his worth.