Yankees could steal star shortstop from arch-rivals in free agency 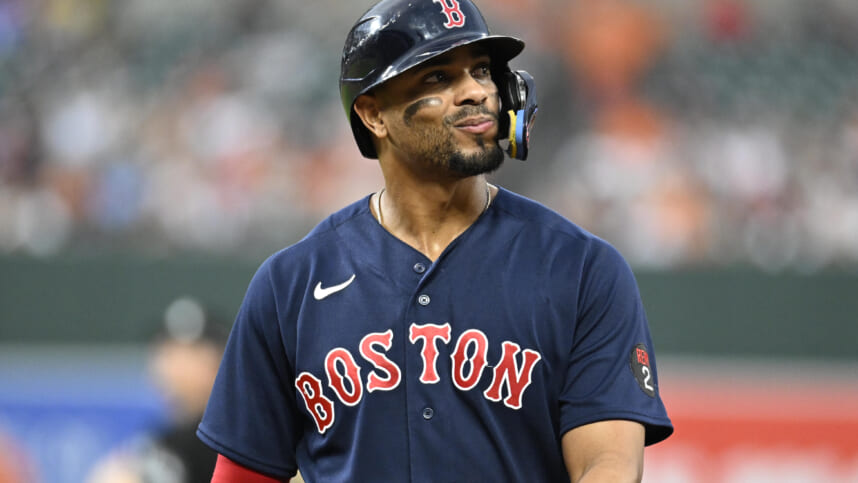 The New York Yankees expect to create a position battle at shortstop with Oswald Peraza and Anthony Volpe in the mix. However, they would be running the risk of the position struggling in 2023, which they can’t afford to experience after the Isiah Kiner-Falefa experiment. There are alternatives, though, notably on the free agent market, including Trea Turner and even Boston Red Sox star, Xander Bogaerts.

In fact, Yankees general manager Brian Cashman has inquired about both players, doing his due diligence in case Aaron Judge walks and finds a new home on a massive contract. However, the team is so confident that Judge will remain in pinstripes, but having alternatives lined up is not a bad idea.

According to Jon Heyman of the New York Post, the Yankees have touched base with Bogaerts as a potential option if Aaron Judge walks.

The Yankees would lock down the shortstop position once and for all:

At 30 years old, Bogaerts is a legitimate star, hitting .307 with a 37.7% on-base rate this past season over 150 games. He hit 15 homers with 73 RBIs, so replacing Judge doesn’t exactly add up, but he is a strong defensive player with plenty of offensive value. He struck out at 18.7% last season with a 9.0% walk rate, slightly higher than his career average.

Seemingly, Bogaerts has gotten better over time but did hit a career-high 33 homers back in 2019 with 117 RBIs. His on-base rate has been extremely consistent throughout his career, and he posted a .983 fielding percentage over 1249.2 innings this past season, accruing just 10 errors with 74 double plays turned.

Locking down the shortstop position would finally alleviate a significant weakness for the Bombers, but after the spark Peraza showed over the final 18 games of the season, they are optimistic he can take over full-time.

I wouldn’t bet on the Yankees signing Bogaerts and Judge, but rather having him in the back of their mind in case they need to change their strategy. Signing a player with four defensive runs saved above average and five outs above average over such a significant sample size of innings is not a bad move, but he will be costly given he’s hitting free agency for the first time and is the second-best hitter on the market behind Judge.