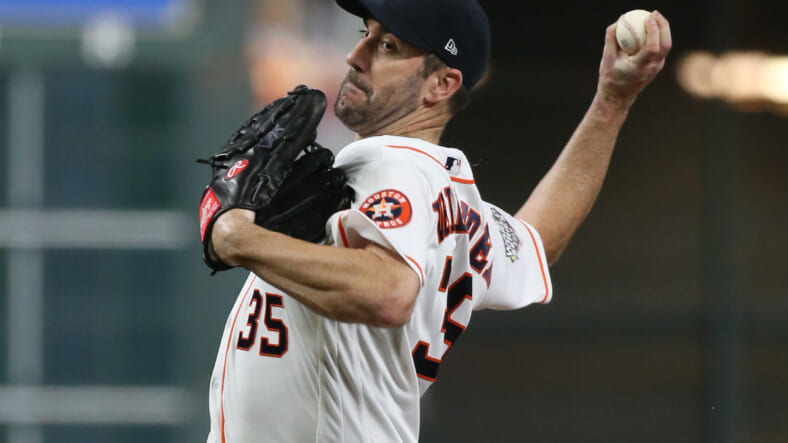 The New York Yankees failed to make any big moves before the lockout commenced on December 2, but that doesnâ€™t mean they aren’t preparing to spend big money once the owners and PLayer Union come to an agreement on a new CBA.

However, the days leading up to the lockout were intriguing, as team’s spent over $1.4 billion to bolster their squads further. One player who was plucked off the market early was starting pitcher Justin Verlander, who agreed to return to the Houston Astros on a two-year, $50 million deal. The contract included an optional second season, giving him more leverage in the situation.

Reports indicated that Yankees’ general manager Brian Cashman had a one-year, $25 million deal on the table for Verlander, which would pair him with his former teammate, Gerrit Cole.

Nonetheless, Verlander elected to stay in Houston, but the contract was never finalized before the lockout, meaning he is still a free agent.

According to Emma Baccellieri, Justin Verlander’s deal was never finalized before the lockout commenced on December 2:

Â Most intriguingly, Justin Verlander and the Astros never finalized their two-year, $50 million dealâ€”even though it was firstÂ reported two weeks ago.

The Astros haveÂ stayed mum on the situation, although they did appear toÂ clear a roster spot for Verlander. But he wasnâ€™t on their 40-man when the lockout came down, which means that, technically, heâ€™s still a free agent.

Verlander is coming off two seasons of rehabilitation, recovering from Tommy John surgery in 2021, failing to make even a single appearance. During the 2020 season, Verlander pitched just 6.0 innings at 37-years-old. Presenting him with a lucrative two-year deal for $50 million was undoubtedly a sign of optimism he could return to full health, and after hitting 97 mph in a bullpen session this past fall, plenty of teams are intrigued by the possibility of him reaching ace status once again.

The loophole is simple for Cashman, if he is willing to raise the stakes and present Verlander with an even more attractive offer, he could shift his attention from Houston and back out of the deal. While it is unlikely this happens, clearly, crazier things are currently underway in the world of baseball.

The last time Verlander pitched a full season was back in 2019 when he hosted a 2.58 ERA over 223 innings. He recorded a 12.11 strikeout per nine rate and 88.4% left on-base percentage. He is still capable of being an incredible player, and pairing him with Cole would give the Yankees one of the best starting duos in baseball.

The change in protocol after the owners and union come to a revised agreement could shift the way team’s view spending, which could open the door for a few different avenues regarding player contracts.