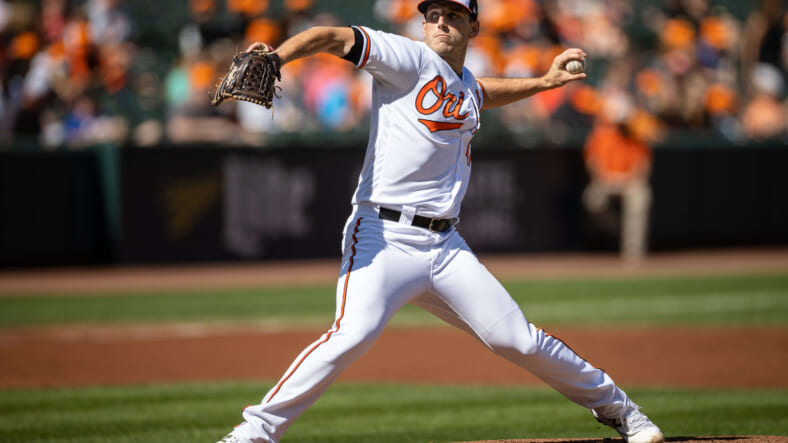 The New York Yankees are in search of starting pitching talent, whether it be through free agency or a trade partner. After offering Justin Verlander a one-year, $25 million deal, it is clear general manager Brian Cashman is willing to spend a pretty penny to acquire a solid talent.

While he could look to an option like Robbie Ray to solve a big hole in the starting rotation alongside Gerrit Cole, he could turn his attention to an AL East rival in a potential trade deal.

The Baltimore Orioles are reportedly interested in trading left-hander John Means, according to ESPNâ€™s Buster Olney. Means is preparing to earn $3 million in arbitration this season, coming off an adequate 2021 campaign where he pitched 146.2 innings.

Means’ ground ball rate might not be attractive to the Yankees, as they look for pitchers that settle in the 40% plus area. He features a fastball, slider, curveball, and change-up. His fastball hovers around 93 mph, which he tossed 47.9% of the time in 2021. Heâ€™s using less of his slider more breaking pitches, resulting in a solid first half of the season.

The Baltimore starter had his best game of the season on May 5, when he threw a no-hitter against the Seattle Mariners. The Yankees could look to expand upon his existing talents, given his capacity for great performances. Means is two years removed from an All-Star bid in which he won 12 games and logged a 3.60 ERA.

Based on his success thus far and the need for diversity in the Yankees’ starting rotation, Means makes a ton of sense. However, it all depends on what the Orioles are asking for in a prospective deal.