Yankees could fill shortstop position with surprise Oakland trade, but with a twist 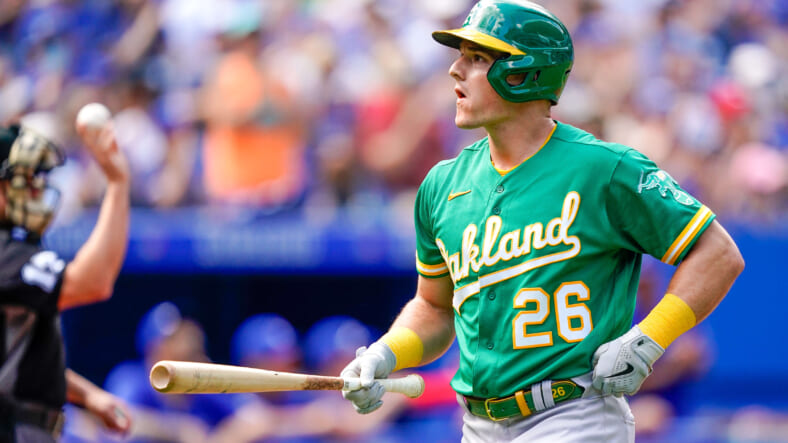 The New York Yankees have an interesting decision to make at shortstop, and as we know, finding a long-term solution would be an ideal result. However, depending on how management feels about two young prospects climbing through the minor-league system, Oswald Peraza and Anthony Volpe, the player they find to solve the spot could be a stopgap.

Of course, landing an option like Carlos Correa would inject an elite player for years to come, but the Yankees would have to overspend. Some might say that ownership has skimped in recent years on spending big money given the amount they bring in per annum, but Correa would command a 10-year deal worth over $300 million.

Names like Andrelton Simmons and Elvis Andrus have been presented as potential targets for the Bombers in a short-term scenario. Trevor Story still remains of interest, but one player that recently bubbled to the surface is third baseman Matt Chapman.

Buster Olney of ESPN stated that the Yankees “have talked a little bit…internally” about potentially trading for Matt Chapman of the Oakland Athletics.

What would Matt Chapman offer the Yankees?

Chapman is undoubtedly an intriguing player given his defensive qualities. However, he’s not the offensive maestro the team may prefer. He is a double-digit home run hitter that sacrifices batting average in exchange.

Management tends to lean toward long-ball specialists, and since Chapman is coming off a year where he posted 27 homers and 72 RBIs, they could be interested in his services. The star defensive infielder also struck out 32.5% of the time over 622 plate appearances. The Yanks would undoubtedly be sacrificing contact-hitting for homers when it comes to Chapman, but he does seem to fit their mold at the very least.

Defensively, though, Chapman has never played shortstop over a prolonged period of time. He spent 150 games this past season at third base, recording a .987 fielding percentage and six errors. He posted a +10 defensive runs saved above average. Chapman has three Gold Gloves to his name in five seasons, including an All-Star appearance in 2019.

However, some believe that Chapman could make a move to the Yankees in a potential trade to play shortstop, but I have a different theory. Considering Chapman is a proven third baseman, it is possible that management moves Gio Urshela to shortstop as a stopgap solution.

This past season, Urshela spent 28 games at shortstop, posting a .970 fielding percentage with two errors. He doesn’t have a ton of experience at the spot, but he played good enough defense to consider a permanent move in this scenario, the Yankees acquire a third baseman like Chapman. At the very least, let the two battle it out.

Most would agree that Urshela has a solidified spot in the infield at this point in time, and having hit .267 with 14 homers and 49 RBIs this past season, he’s also a sufficient batter. It would certainly be interesting to see Urshula spend his time at short, but this theory could work considering Chapman’s dominance at the hot corner.